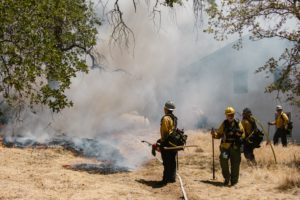 “Save our homes, save our deserts/forests, save our pets and save our firefighters”.

Three years ago, when her young son was gravely ill, Sunny Parker prayed and made a promise: “My son was dying in the hospital. I prayed, ‘Lord if you spare his life, I will spend the rest of my life doing good.’ My son walked out of there. The Lord kept his promise, so I kept mine. I try to spend as much time as I can educating people about defensible space, protecting the desert, and doing what I can to keep my promise.”

True to her promise, her good works have been many and varied through the years, including a flight early on to bring relief to a child in need.

“When I started, I went to Maryland to pick up an emotional support animal for a young man who needed it,” Parker recalled. “I flew and I was the only person on the airplane. I never intended for this to turn into what it has; it just sort of happened.”

What has happened is the creation of Arizona Foothills 911, a pending non-profit organization in the form of an emergency support chapter designed to help neighbors and their animals when emergencies and tragedies strike.

The Arizona Foothills area includes Cave Creek, Carefree, New River, Desert Hill, Rio Verde, North Scottsdale, Black Canyon City and Anthem; however, the group helps where it is needed all over the state.

With the motto, “Neighbors helping neighbors because it’s the right thing to do,” the chapter’s goal is to “Save our homes, save our deserts/forests, save our pets and save our firefighters,” said Parker, who is the president and founder of the organization.

There is also an Arizona Foothills 411 site that sends out alerts about car wrecks and notifies residents in surrounding communities about fires, floods and other emergencies.

“It gets the word out to NAU [Northern Arizona University] and U of A [University of Arizona] kids about road emergencies in those areas,” she explained. “We’re starting to grow and more people are reaching out to me. People in Northern Arizona can post there, too. We’d like to help people establish chapters, so we can save our beautiful way of life. My goal is to have a chapter in Flagstaff and a chapter in Sedona and to eventually cover the entire state of Arizona.”

Parker operates the chapter out of a back office at her home in Cave Creek, which will soon be ready for use by firefighters and first responders during emergency scenarios if needed.

The chapter began about two-and-a-half years ago. It numbers around 10,700 members and operates with a board of directors. An updated website is expected by January 2022. The chapter started in time to help out during some large fires. During recent fires in Bagdad, the Arizona Foothills 911 community delivered a large truckload of clothing, food and pet supplies to area residents. More recently, the community collected more than 3,500 pounds of dog food, cat food and litter for Globe.

In 2020, during the Ocotillo and Aquila fires, Arizona Foothills members helped rescue horses, livestock and other animals, as well as people. A plan was in place to take the horses and other livestock to the Cave Creek Memorial Arena Rodeo Grounds. “It was amazing to see llamas, alpacas, horses, tortoises and many other kinds of animals be in a safe place. Prior to the big fires here, we had never had anything like this,” she said.

Journeys to bring support, including her recent trip to Frontier Town in Cave Creek to distribute 300 Ready-Set-Go packets with emergency information, are documented on the group’s Facebook page at Arizona Foothills 911. All services and materials are free.

Recently, veterinarians were added to the chapter, including “two horse vets, a dog vet, a reptile vet and an exotics vet,” she said.

The group has reached into Northern Arizona, where volunteers have provided assistance to the Interagency Bear Jaw Fire and Fuels Management crew, firefighters aligned with the Highlands, Pinewood and Summit Fire District.

“Funding for wildland firefighters is quite limited,” Parker explained. “We were able to purchase 22 flashlights for 22 firefighters. Those were Fenix flashlights that penetrate smoke. The Bear Jaws also mentioned they were sleeping on the ground when they hike into the fires. We were so blessed to have so many people donate and raise the money so we could go to Munds Park and give each and every one of those firefighters a cot [at $389 each].”

Currently, Parker and others are trying to raise money to replace the Bear Jaw’s

all-terrain utility vehicle (UTV) that can be used for many purposes, including to rescue injured firefighters.

Helping firefighters and other rescuers save pets is challenging. Keeping information up to date for each pet is essential, she says, as well as having the right kind and number of pet carriers needed for each rescued animal.

“When you have to evacuate, you should have carriers in the house with a marker that has the pet’s name, allergies and medication list, so you are ready to take them in a moment’s notice. Some people leave pets behind, and rescuers come in and don’t have the information they need. The more information we can have out there for rescuers, the better.”

Making sure the microchip on an animal has current information is also important.

“With the microchips, the problem is people don’t update them,” she said. “The microchip may go back to someone who died three years ago. With a dog or cat, it’s a good idea to have a collar and tag with a name and phone number that is current.”

If families have stickers on doors alerting rescuers to pets in a house, they should also be kept up to date, she advises. “The problem with stickers posted on windows is that they do not have a date on them. The sticker could belong to the previous homeowner, and you might have no pets at all. We must keep our firefighters in mind and their safety. Update your door/window stickers yearly when you change your fire alarm batteries.”

She notes that people have all kinds of pets, including exotic animals. “What do they eat? We didn’t know. That information is helpful to have during an emergency.”

During the 2020 Ocotillo Fire northwest of Cave Creek, she recalls some area residents had birds but no carriers.

And, she adds, special consideration should be given for larger animals like horses. “You have to train your horse to get into a slant trailer, a flat trailer or a straight trailer. You don’t know what type of trailer rescuers will bring. When you have helicopters overhead and a 1,500 pound animal is completely terrified, it’s a deadly situation if you are not prepared and your horse is not prepared.”

She advises equestrians to have identification tags for horses. She recommends ID My Horse emergency medical and identification tags that can be braided into the mane and include the horse’s name, owner’s name and phone number, as well as a list of medications and diet details for the horse.

“Some horses cannot have alfalfa, others can only eat Bermuda. If a horse has had colic surgery, the rescuer needs to know the diet restrictions.”

Parker emphasizes preparedness and being informed about Ready-Set-Go, a nationwide program that educates residents about proactive measures to take before an emergency and actions to follow when communities are threatened.

“If I have pets, especially horses, I recommend leaving on the ‘Ready.’ Once they say ‘Go,’ the roads are congested and that causes many problems for our first responders as well as residents attempting to leave the area.”

She says the best approach to emergencies is to establish individual chapters throughout the state so volunteers are familiar with the terrain and roads of their area. QCBN