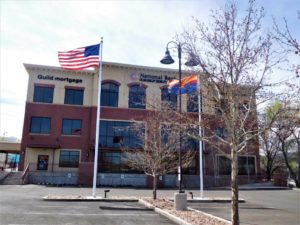 Those dollars will be used to pay the purchase price and to cover the additional renovation costs.

Prescott City Council members showed no hesitation in approving payment of $7.55 million for the 14-year-old National Bank three-story building located at 201 N. Montezuma Street to replace the 59-year-old municipal building, which has served as Prescott City Hall since the early 1960s.

The purchase will be from Arma Vista Properties, LLC, a Prescott corporation. The proposed land deal will go into a 60- to 90-day escrow process. City Manager Michael Lamar called the April 13 decision a “benchmark day.”

Councilmembers also authorized borrowing $10 million from the city investment pool. Those dollars will be used to pay the purchase price and to cover the additional renovation costs.

The purchase of the 30,600-square-foot bank building had been discussed over time by the City’s Facilities Optimization and Property Usage Commission (FOPU). The group, chaired by Prescott resident Alex Vakula, was formed in late 2018. The commission had agreed more than a year ago that city services needed to be consolidated as much as possible into a single location that had at least 27,000 square feet. The current City Hall has only 20,000 square feet – one-third less space than the new building. Another advantage of the new location is the increased number of parking spaces. The current City Hall has 64; the new site has 93.

When city officials recently became aware of the availability of the bank building, Vakula said the city began looking seriously at the property.

Following the escrow period, renovations can begin. That will allow some city departments to move into the new building toward the end of the year. In the meantime, some tenants currently in the building, including National Bank, will continue to function until all renovations are completed.

FOPU member Mike Fann, owner of Fann Contracting, said that to construct a similar building in the current construction market would cost between $11 and $12 million, significantly more than what the city will pay for the bank building, let alone for the value of the land.

Currently, the city is developing an RFP (request for proposal) to sell the existing City Hall properties. QCBN