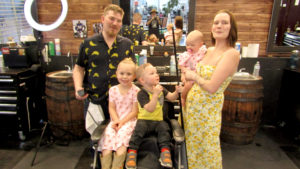 “I appreciate all the people who came to me and have given me a new life. It’s been a long journey.”

Through willpower and perseverance, Joseph Bellone survived a horrific car accident and has become one of the best known barbers in the Quad Cities area.

The crash occurred on Nov. 7, 2016, in Paulden. Bellone was ejected from the vehicle and severely injured. He shattered bones, crushed his sciatic nerve and suffered head injuries. In the first week after the accident he had eight surgeries.

“It took them six months to put me back into one piece, but I still couldn’t walk,” he said.

One year later, he returned to work as a barber. “I had to work twice as hard, but I kept doing what’s best for my little girl,” he said.

Before the car accident, Bellone also had been a brick mason, but that manual labor had become too much for him. So, Bellone has made shaving beards into an art form.

“I see it much differently. You have to take your time and pay attention to every detail,” he said.

Bellone uses three hot towels when shaving a beard, while most barbers just use one or two. He also uses two different strokes, going with and against the grain to give it the best shape.

Bellone received his training cutting hair and beards while attending a military academy in Queen Creek. There were 450 students who needed their hair cut every two weeks.

Today, he can be found at Smooths Barbershop at the Prescott Gateway Mall. “I have a lot of consistent customers because they feel comfortable,” he said. “I appreciate all the people who came to me and have given me a new life. It’s been a long journey.”

Bellone said that long journey has included being part of a wonderful family. “I’m just happy because the kids are beautiful and healthy,” he said.

Born in Glendale, Bellone’s mother moved to Paulden when he was 2 years old. He now lives in Prescott with his wife, Maddy, and three children.

Before the car accident, a friend told me, “Don’t let anybody tell you that you cannot do something, because if you believe in yourself there is nothing that you cannot achieve.”

What Actor Should Play You in a Movie About Your Life?

Leonard DiCaprio because people have told me I have similar facial features…funny.

I want to go to Italy and Ireland. My mother’s Irish and my father’s Italian. Ireland has gorgeous countryside and Italy has a ton of culture.

My Favorite Activity Outside of Work

Any activity with my wife and children. I just like watching the children grow and showing them what life is about.

No one time stands out because we laugh all the time. We have a lot of good times. QCBN