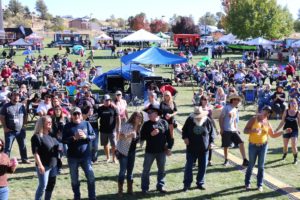 Country Western singer Cory Marks says, “Drive, get out of this town for a little while,” and Vicki Burton says, “Make your destination Watson Lake for the Big Sting Country Music Festival Weekend Campout.”

The Big Sting is being hosted by the Shadows Foundation, now in its 11th year as a non-profit organization helping first responders receive advanced health screenings and supporting individuals in need of financial assistance who are affected by life-threatening illness.

“This is our biggest event we’ve ever had,” said Burton, Shadows Foundation founder and festival organizer, who is expecting as many as 5,000 people. “We have really good artists – Jerrod Neimann, Shenandoah, Ned Ledoux, Parmalee, Roger Clyne and the Peacemakers, Sunny Sweeny and Cory Marks, for example.”

The outdoor event at Watson Lake will have lawn seating with bar areas, food trucks and some tents. “We anticipate that a lot of people will be camping. We’ll also have some walk-in traffic,” she said.

Through Shadows, hundreds of firefighters and police officers have received the free advanced screening service, which ordinarily would cost $225. Also, more than 500 Northern Arizona families and individuals have received financial support in times of sickness.

“No one battling life-threatening illness should worry about how he or she is going to pay utility bills, get to doctor appointments, put gas in the car, keep food on the table, cover copay costs and medical bills, make household repairs, get firewood to keep warm or any other day-to-day living necessity,” said Burton. “That is why there is the Shadows Foundation, so we can help with the right now, so individuals can focus on getting better, so they can spend the time with loved ones.”

Burton says the advanced screening, which the foundation has made available through its Hearts Worth Saving program since 2012, can detect heart conditions in high-risk populations that may otherwise go undetected. Hearts Worth Saving was created when Northern Arizona firefighter Patrick Burns approached Burton after he researched how vulnerable first responders are.

“I found there is a 300% greater risk of having a heart attack than the general population,” Burns told FBN about first responders in a 2018 interview. At age 41, he had a heart attack while jogging with his wife, despite the fact that he was young, healthy, physically fit and had just passed his annual physical exam. Two years later, he had another.

Shadows also has partnered with the Flagstaff Police Department to develop a compassionate solution to panhandling with the Better Bucks Program. It allows donors to purchase vouchers that can be used like cash for non-alcoholic and non-tobacco related products at participating local businesses. To date, the Shadows Foundation has paid out more than $26,000 to participating merchants for redeemed vouchers.

Tickets for the Big Sting long weekend music festival are $100 for three-day adult passes. Children age 12 and under get in free. Military personnel, veterans, law enforcement officers and first responders will receive discounted three-day passes for $35. Eleven hundred three-day passes are being made available to firefighters, law enforcement agencies, veterans and members of the military on a first-come, first-served basis.

Gates open at 5 p.m., Thursday Oct. 14. A U.S. Army flag ceremony will kick off the evening honoring military veterans and the music will begin with southern rock band The Bayou Bandits.

Flagstaff Business News is a sponsor of the Big Sting. For more information, visit thebigsting.com. QCBN