You are here: Home / Business / Business is Booming in the Quad Cities 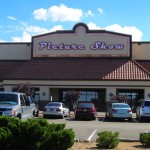 A visit to Frontier Village on Highway 69 provides a stark comparison to the region’s shopping scene a couple of years ago. A new McDonald’s, a 3,000-square-foot Starbucks, the new 20,000-square-foot Planet Fitness facility and the much-welcomed Picture Show Entertainment provide a sign of the improved economy.

And when you visit Frontier Village’s website, you can watch a video titled, To Think They Called us a Ghost Town, complete with a Ghost Train song and messages including, “alive, well, ready and waiting.”

Prescott’s Chamber of Commerce CEO David Maurer is enthusiastic about Picture Show Entertainment, saying the additional movie screens at Frontier Village are an improvement for area residents. “There are 14 movie screens at the Harkins in Prescott Valley, so between the two, there will be a lot of movie opportunities,” he said.

Frontier Village Marketing Manager Amber Hudson is enthusiastic about the theater, too. “It has brought jobs into the area, and there are all kinds of networking things they have the opportunity to do there in the theater. As far as the different movies, different features, they can host events and movies,” said Hudson. The entire theater was rehabilitated, she said, including the carpet, the walls, screens and chairs.

For people who want to grab a bite to eat either before or after the show, the list of options keeps growing: Zeke’s, Fujiyama, Burger King, a new McDonald’s, Peter Piper Pizza, Applebee’s, Golden Corral, Subway, Red Lobster and others.

Planet Fitness has a tentative opening date of Nov. 11.  Co-owner Steve Thomas has another Planet Fitness in Yuma and is opening the Prescott facility with his two sons and daughter-in-law.

Of the nearly 700 Planet Fitness centers across the United States, 50 percent of members have never belonged to a gym or workout facility. “Some members have been working out all their lives, but for many, this is a new experience,” said Thomas. Planet Fitness has a philosophy: it is a judgment-free zone. Thomas says people regularly comment on the comfortable environment, which is very important to people wanting to make a life change and become more healthy.

In addition to the shopping center newcomers, Hudson says owners of many stores in Frontier Village have renewed their leases. “Our ultimate goal is to refill the center. We’re working hard to do that. The more stores you have, the better the shopping experience will be for the community,” she said.

The owner of Top 4 Nails agrees. Anna Hoang Le says the addition of new retailers is good for her business. “Things are very good and I will stay here for a long time,” she said.

Auraly Hollingsworth is looking forward to a robust future in Frontier Village. The general manager of Rack on Cue Family Billiards says they opened in July and things are going well. “People are embracing the family friendly message,” she told Quad Cities Business News. The local businesses are giving a lot and we are giving back to other businesses,” Hollingsworth said. She wants to see more people, including high school groups realize they can come and hang out. “There is not a lot for people under 21 to do in the area after the sun goes down.” Rack on Cue Family Billiards is open from 11 a.m. until midnight.

The bustling shopping area is just one sign of the region’s economic turnaround, says Maurer. “For the last couple years now, little by little, you begin to see the improving economy, new stores, new opportunities.” As you look around each of the cities in the area, he adds, you can see signs of the turnaround in the economy. QCBN