You are here: Home / Local News / Candle Business Moves Back to the Future 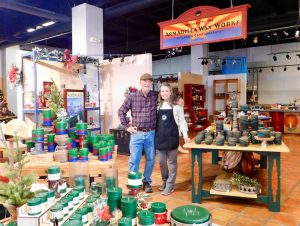 Their allure is legendary. The mystery and beauty of candles hold a cherished place in human history, dating back to the ancient cultures of the Egyptians.

Today, candles are traditionally used to decorate birthday cakes, create a romantic mood for a special meal and to mark all manner of solemn and meaningful ceremonies.

In modern Arizona, the husband-and-wife owners of the Armadilla Wax Works, Kent Buttermann and Denise Jenike, have long worked to preserve and expand the ancient charms of the candle. Working side-by-side, Buttermann is the master candle maker and Jenike creates the retail displays throughout the store to showcase candles in their best light.

Moving from a business site in Prescott Valley in mid-May, the owners have relocated to a space on Highway 69 in Prescott, a kind of “back to the future” story because the business operated in this Prescott location some 20-plus years ago.

Advertised as “the one and only Armadilla Wax Works,” the store move is beautifully timed to synchronize with the busy holiday season.

“Holiday traditions may include family gatherings, gift giving and helping with community outreach and events,” she said. “The Armadilla Wax Works is happy to be a part of Arizona’s Christmas City official designation.”

The company’s retail store on Highway 69 and the web store both offer shipping.

The store website comments on the charms of Armadilla Wax Works: “A candle store may not be an official essential business, but we have found that candlelight does provide a warm and welcoming glow and along with listening to your favorite music, a nice aroma helps create a relaxing ambiance.”

There is also a lot of hard work behind creating a successful candle business. “Everything we make we design ourselves,” Jenike said. “All of our candle molds are our own designs. The molds give the candles the texture, the size and the designs we want.”

Buttermann hand crafts candles in the workshop in the store, apart from the retail section. The production area is not open to the public, but he occasionally invites guests in to see what he is making.

He says candle making is both a science and an art and involves learning the techniques of making silicone molds and researching the types and properties of paraffin wax.

With his lifelong experience, Buttermann has combined the best materials to master the craft with artistry. He uses only highly refined wax, clean burning cotton braided wicks and quality fragrances. “Candlelight doesn’t just happen. It’s made to happen,” he said.

The variety of designs have evolved through the years from decorative floating candles to pillar candles, both scented and unscented, in Southwestern styles of texture and color.

In addition to being an auspicious business location, Prescott proved a good place to raise a family. The couple has three sons who grew up in the business and have now moved on to pursue their interests. Their oldest son, Charlie, who worked in the retail store and later in wholesale sales, now lives in Austin, Texas. Twin brothers, Matt and Dan, live in different cities in the state of New York and both are musicians and teachers, perhaps following in their dad’s footsteps, as he was a member of the Kiwanis Jug Band and played annually during the J.S. Acker Music Showcase in downtown Prescott.

The history of the Armadilla candle business goes back a long time. The couple met while attending Arizona State University, where both studied photography. They started their candle business in Tempe in 1971, working with two other friends. They were part of a thriving arts and crafts scene that revitalized a downtrodden downtown area with lively new stores and street fairs.

“I was still going to ASU, so I participated when I could,” Jenike recalled.

“The name, Armadilla, was conceived in fun by all three and became the inspiration for the logo. Making candles was a popular idea at the time, along with other crafts such as making products with leather, clay and wood.”

As sole owners, after their partners moved on to other endeavors, the couple sought more space and a sense of a hometown community by moving both family and business to Prescott in 1984.

“We sort of rediscovered Prescott because we had done some arts fairs downtown there,” Jenike said.

Settling happily into the Highway 69 site, business was good until an electrical fire in the middle of the night in the early 1990s forced a move from the location.

In the following years, other locations were explored, on Montezuma Street in downtown Prescott and in Prescott Valley, as well as operating an outlet in downtown Flagstaff. But, the draw to return to the original location in Prescott proved strong and they “are happy to be settled now back in Prescott,” Jenike said. QCBN