You are here: Home / Business / Center for the Future Makes its Home in Downtown Prescott 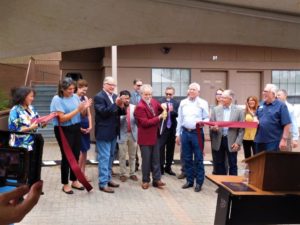 What was formerly a City of Prescott annex building behind City Hall is now home to the Center for the Future, a hub for innovation, incubation, business attraction, growth and retention of cutting-edge technology firms.

It became official at noon, Friday, July 13, when CFF President and Director John Haass, Ph.D., was joined by leaders from the community, city, Yavapai County, State of Arizona and representatives of Congress in declaring the CFF officially at home at 220 South Marina.

Phase 1 of the project will be housed in approximately 3,500 square feet of leased space in the former City Annex. High tech firms located there include Simple WAN, SEG West (Systems Engineering Group is a subsidiary of AXIENT), CyberCore International, GSIS and a stealth start-up named NEWCO. Also in the complex is Cyber Warfare Range, a digital jungle gym that offers training and competition to participants.

During a program organized by the Prescott Chamber of Commerce and emceed by spokesperson Sanford Cohen, several speakers emphasized how the center will stimulate the economy by supporting employment and retention of local college and university graduates.

Harry Oberg, former Prescott mayor and now District 1 Supervisor on the Yavapai County Board of Supervisors (BOS), said, “I want our bright, talented young people to remain here in the Quad Cities.”

Prescott Mayor Greg Mengarelli said when he first heard the term “incubator” associated with the CFF, he thought of the incubators his parents used in Kansas when they were hatching chickens. “That’s an apt analogy. What the CFF will do is hatch new businesses.”

It was noted that one of the slogans for the CFF is “Accelerating regional economics through technology.”

During remarks to the more than 80 people attending the ribbon-cutting and grand opening, Haass said he was pleased that CFF, incorporated as a non-profit organization, has in less than a year attracted a number of high-tech companies that want to call Prescott home. “Our having the support of the city and the Prescott Chamber of Commerce Foundation, as well as a number of community businesses and organizations, is making what once seemed impossible possible.”

Haass, who is also a professor at Embry-Riddle Aeronautical University, said the past six months have been especially successful. Several grant proposals have been submitted for Rural Economic Development Funding and a number of local philanthropists have made contributions to the CFF.

He noted that architects are working on plans for a potential Phase III 15,000-square-foot multistory home for the center.

The vision for the CFF began about six years ago during a fall “brainstorming breakfast” led by then ERAU Chancellor Frank Ayers. He challenged those present to set aside preconceived boundaries. Someone tossed out the “Center for the Future” notion. “It caught on, with the result that today, the greater community has enthusiastically endorsed the CFF,” said Jim Robb, a former economic development consultant for the City of Prescott. QCBN