You are here: Home / Spotlight / Challenges Ahead for Alzheimer’s Association Director 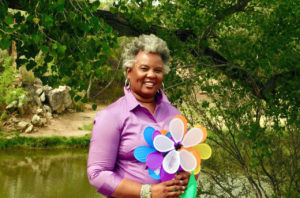 Lesley Jenkins, regional director for the Desert Southwest Chapter – Alzheimer’s Association, has a daunting task ahead.

It involves creating more awareness and more support groups for what is becoming the most insidious illness attacking Arizonans – dementia caused by Alzheimer’s disease. It is the fifth leading cause of death in the state. Alzheimer’s is the most common cause – 60 to 80% – of all dementia cases.

“Arizona leads the nation as the state with the highest growth rate of Alzheimer’s disease,” said Jenkins. “Right now, more than 150,000 people 65 and older have been diagnosed. That number is expected to increase by as much as 33% in the next five years.”

Two-thirds of Alzheimer’s victims are women.

Jenkins, who accepted the regional director job in February 2019, said the past 10 months have been especially difficult for her and her staff of two. The COVID-19 pandemic essentially stopped face-to-face meetings and training sessions scheduled from her office at 3111 Clearwater Dr., near the northern boundary of Prescott.

“The region for which we are responsible is bigger than some states – more than 66,000 square miles. We work with people in Yavapai, Coconino, Mohave, Navajo and Apache counties. It’s a growing population of more than 773,000. Many of those are older people,” she said.

Despite difficulties with travel and in-person meetings, Jenkins and her team have been recruiting volunteers to help in various areas. “Additionally, we have a variety of resources and programs that help people cope with all aspects of the disease and its progression,” she said.

Among those resources cited by Jenkins:

24/7 Helpline – 800-272-3900
Available 24 hours a day, seven days a week, a professional consultant is available to talk confidentially and provide information about Alzheimer’s and related dementias.

Support Groups – When circumstances permit, free forums conducted by trained individuals are offered throughout the four counties. Most are for dementia care partners, but some are for individuals diagnosed with early-stage dementia.

Ongoing Education – These presentations utilize trained volunteers who introduce the audience to all aspects of the disease and provide resources to help caregivers find assistance.

Early Stage Programming – These programs include specific activities focused on engaging, encouraging and empowering diagnosed persons to utilize their strength and capacities as long as they can.

Safety Services – Jenkins and her teams, in collaboration with the greater Alzheimer’s Association and the MedicAlert Foundation, provide membership plans with 24/7 “Wandering Support,” a nationwide emergency response service for persons with dementia who have a tendency to wander or have other medical issues.

The Nashville, Tennessee native earned a Bachelor’s of Science degree in journalism, speech communication and theater at Tennessee State University. For several years, she served as assistant director for media relations for The Ohio State University. She also had experience in public relations for the City of Columbus. It was in Cleveland where she met her future husband, Rodney Jenkins.

Her husband has been a college and university administrator most of his professional career. Both Lesley and Rodney were working in Lock Haven, Pennsylvania. She was the associate director and member coordinator for the YMCA there. Rodney accepted a position as vice president of community relations at Yavapai College in Prescott in 2017.

They have two sons, Jayden, 16 and Jared, 13. Both are enrolled in Prescott public schools.

Jenkins said her most immediate challenge is to organize the annual “Walk to End Alzheimer’s” scheduled in the Quad Cities Oct. 3, and in the Greater Verde Valley on Oct. 24.

“This is a part of the world’s largest event to raise funds to create awareness and support for Alzheimer’s care and research. Because of the pandemic, we’re pivoting to do it virtually this year. Even so, we are calling on people of all ages and abilities from throughout Northern Arizona to step forward and join in this major effort. We are committed to focus not only on care and support for families in this region, but also to help fund research to find a cure.”

From my pastor in my early career, who said, to be a leader, we had to have impeccable character and respect for authority and realize that quality of life is more important than quantity.

The Biggest Influence on My Career

My mom. She sacrificed a lot for me. Now that I’m a mother, I want her to know the time and attention she paid me were not in vain.

Characteristics I Admire in Co-Workers and Colleagues

A solid work ethic and ability to work together as a team. Teamwork makes dreamwork.

If YOU Could Snap Your Fingers for Social Change

I would encourage empathy. Empathy allows us to imagine what it is to be someone else. It allows a person to speak the truth and be respected. QCBN

For more information about the Alzheimer’s Association, contact Jenkins at
ldjenkins@alz.org.