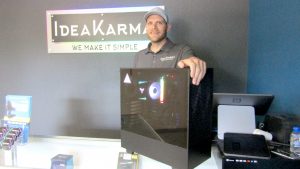 Idea Karma, LLC, is a one-stop shop for computer and technology needs for businesses and homes.

Owner Robert Moses said he opened the shop in Chino Valley because nobody else was providing these services for the Chino Valley and Paulden area.

Idea Karma opened May 1 with a number of Chino Valley businesses calling the shop for assistance with computer issues. Chino Valley Councilman Tom Armstrong, during a June meeting, said Idea Karma is a good addition to the community.

Moses emphasizes that he provides the most updated technology for his customers. He said too many computer shops don’t stay updated to meet customers’ needs.

His motto is: “We make it simple.”

“I emphasize how simple I can make technology for people’s needs,” he said.

“I don’t market there because I have enough business here,” he said. “I saw the need for affordable quality services in the community so entrepreneurs can grow.”

Moses said all businesses need to be online in order to be successful in today’s market.

Moses said a lot of the area computer shops are booked three to four weeks in advance and take a while to get computers repaired; however, unless a part is needed, he can get the computers back to customers quickly. He has more than 20 years of computer experience and continually updates his computer education.

“This is so I can make better decisions for business owners and guide them through everything,” he said.

Moses lived in Paulden before moving to work in Phoenix to raise the capital needed to open the business in Chino Valley.

“I love the area. This is my kind of people and environment,” he said. “It’s great to be back. Phoenix [is] overcrowded.”

Moses knew as a youngster that he wanted to work on computers. When he was 14, he would fix people’s computers and he would give his mom money to pick up the parts he needed when she went to town.

His first job was working on a farm in Maricopa County, where he saw a huge need for the farm to have computers.

The experience of his younger days paid off as he has worked on computers for the U.S. Department of Defense, and medical offices.

Moses said the community has been amazing with its response to Idea Karma opening.

“Everybody who comes in seems to be happy,” he said. “I’ve gotten great reviews.”

Moses said too many computer shops respond to customers in a robotic way.

“Computers impact people’s lives so the experience for people is personal. There’s not a lot of empathy in computer shops. I’m not in this for a race for money.”

As for his retail computers, Moses said he can match the prices of other stores. He doesn’t carry a lot in stock, but he can order it.