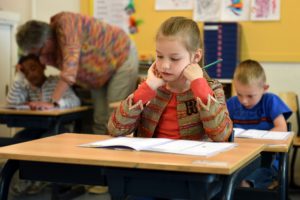 Author and educator Deb Dillon has released a report: “Charter Schools: What They Are, How They Operate in Arizona, and How They Impact a Small Arizona City.” Dillon has a background in teaching, school administration and dropout prevention. She also is vice president of the Prescott Unified School District (PUSD) board, although she says that her report does not represent PUSD. She is proposing to state school boards, school administrators and legislators that Arizona schools, regardless of the model, be funded and regulated equally.

The Birth of Charter Schools

What evolved is a dual system of institutional management, which Dillon has evaluated and summarized through research and discussions with officials and advocates of both charter and district schools.

“The greatest feature about Arizona charter schools in my opinion is pluralism,” writes Matthew Ladner, head of the Arizona Charter Schools Association’s (ACSA) Arizona Center for Student Opportunity, in an online letter to charter leaders. “Our state is diverse, our families have wildly varying priorities and preferences, and our students possess different aspirations. Arizona charter schools have been at the vanguard of creating meaningfully diverse schooling options.”

An ASCA media release states that Ladner was tapped in January to head the student opportunity center, a new non-partisan think tank devoted to providing information about the impact charter schools are having on Arizona students.

Citing some Arizona charter schools’ emphasis on arts, equestrianism, Science Technology Engineering and Math (STEM), classical education, second chances for students with troubled academic careers, back-to-basics education, or helping students with disabilities, Ladner states that “in the past 25 years, Arizona’s charter schools have helped invigorate the state’s education system by improving student academics while serving as a model for other states to replicate.”

Proponents of both public educational systems – charter and district – acknowledge the significance of quality education for all Arizonans, according to Dillon. The difference occurs in how the two very different systems are funded, administered and held accountable. Her goal for Arizona is instituting a dedicated, equitable and sustainable funding stream that treats the state’s public schools equally regarding regulation, oversight and taxpayer dollars.

Rather than triumphing as laboratories of innovation, Dillon continued, charters became competitors for the ever-stretched Arizona education budget. Arizona now is home to more than 500 charter schools, capturing the highest enrollment of students across 45 states, Dillon noted, with six district and seven charter schools serving Prescott.

“Charters were supposed to promote positive competition for district schools,” Dillon said. “With a general lack of funds for all public education and different rules for the two systems, that doesn’t always work well. By regulation, charter schools remain relatively small, while district schools must increase school and/or class sizes. District results are then compared to schools that don’t serve and/or keep all students.”

“Are district schools failing, or is the system of evaluating schools failing?” she asks. “A single test score [citing AZ Merit Pass Rates], which ignores broader aspects of what happens in schools, such as culture, relationships and character education, is not an accurate measure of school success.”

Ladner writes online that families often “benefit from simply having the option to attend another school. When my children needed a different option, Arizona charter schools came through for us. I will always be grateful for that.”

Dillon reports that “charter schools, on average, provide educational results equal to district schools. Performance varies when demographics are taken into account, since charter schools often focus on college preparatory students; spend little or no money on food service or transportation; and usually do not accommodate as many special education, English Language Learners (ELL), or at-risk children.”

Enrollment in Arizona’s charter schools has risen 81% since 2008, compared to 2.7% among district schools, according to Dillon.

“Charter schools are big business,” Dillon said. “We need to level the educational playing field. All public schools in Arizona are underfunded, but it costs more money for the district schools in their mandate to be all things to all students. Families must have access to nearby district schools that are properly resourced to serve the student population.” QCBN