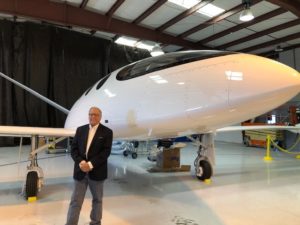 Fostering capital investment and facilitating business incubation for high tech industries is the answer to bringing high paying jobs to Quad Cities workers and halting the “brain drain” of intellectual capital to the outside world, according to local visionaries managing the transition.

“One challenge was that we had no strategy for one source to work with our colleges and universities to go after the technology sector or high paying jobs,” said Jim Robb, economic development consultant for the City of Prescott, president of the Northern Arizona Technology Alliance (NATA), and managing partner of The Robb Group, LLC.

That shortcoming was resolved late last year, he explained, with the creation of NATA, a “think tank to explain to prospects why they would want to relocate and grow their businesses here. We now have incubators, mentors and colleges working together to share our story to create tech jobs here as an economic development engine.”

Locals Henry Ebarb, of Eightfold, Inc., and John Markham, of Consent Solutions, joined Robb in co-founding NATA, which acknowledges that “Northern Arizona has been a high growth region for several decades, bucking national trends for rural regions,” Robb said. “However, despite continued double-digit expansion of the Flagstaff, Prescott and Cottonwood/Sedona corridor, technology has lagged. NATA is redefining the region as a vibrant hub for startups and large-scale tech organizations.”

Robb believes that 21st century high-tech jobs must be part of the local economy to stop the export of intellectual capital and mitigate economic risk. “Despite four top-notch colleges and universities [which are] turning out capable graduates, technology is not even on the radar screen of jobs available in this area,” he said.

Historic reliance on tourism, retail and construction nourishes today’s local economy, he says, but it does not address the employment opportunities and pay scales sought by career-ready university graduates.

“We must be thinking 20 years ahead to encourage and support startups, entrepreneurship and innovation in technology industries,” he urged, describing Prescott’s need for more tech enterprises such as electric commuter plane developer Eviation Aircraft of Israel and global manufacturer Cobham Aerospace and Defense. Robb was part of a team that brought Eviation to Prescott in 2017; Cobham ramped up its local operations in 2009.

A slower pace of attracting tech companies in Northern Arizona contrasts with the burgeoning technology influx setting U.S. records in Phoenix and Tucson. The larger cities’ successes have prompted Robb and NATA to pitch expansion to Prescott via satellite offices and operations.

“If we are to be successful, we need to spread this technology wealth into Northern Arizona,” said Jon Haass, Ph.D., NATA vice president and interim dean and professor of cybersecurity at ERAU. “Yavapai County is a great place to expand.”

The state’s technology employment grew more than two times faster in the fourth quarter of 2019 than the U.S. economy, according to the Arizona Technology Council (AZTC). Tech firms secured $864 million in venture capital investments and logged an average startup valuation of $3.9 million.

“Arizona enjoys a diverse mix of tech industries and professions, with the average technology wage nearly double the average wage in non-tech sectors,” AZTC reports. “Currently, employees in computer systems design, semiconductor manufacturing, and aerospace product and parts manufacturing account for roughly half of all annual wages across the state of Arizona.”

The quarterly study also reports that 9,303 technology companies operate within Arizona, employ 189,926 people, and pay out nearly $19.8 million in wages. Arizona’s average tech salary is $85,874 a year, and 252 jobs in other sectors are created for every 100 tech workers hired. The state’s tech wages grew 6.76 percent over the prior year.

“The Valley really jumped on the tech bandwagon,” Robb explained. “Technology was really weak there in 2000. Now, the question is, ‘How do we in Northern Arizona get a piece of that?’  We have everything going for us up here: brain power, research and development, cybersecurity, and the Internet of Things. It’s time to start getting those good paying jobs.”

He added that NATA is networking with the Arizona Technology Council to grow awareness and build a base with existing organizations and to attract new startups spun off from colleges, universities and other entities.

Robb chronicled four Seattle-based entrepreneurs who a decade ago brought an idea to market and earned a collective $500 billion. He envisions that for Prescott. “If your son or daughter came up with a good idea, you’d want someone to work with and mentor them. We need to get businesses to keep our kids here, to fund these great things that our kids are doing.”

One such opportunity is Prescott’s upcoming “Innovation Challenge,” with the Arizona Commerce Authority offering $250,000 in prizes to tech entrepreneurs this fall. Additionally, the AZTC plans its 2020 CEO leadership retreat in August at the Hassayampa Inn. Discussions have involved a tech park and initiating business tourism for tech prospects.

Haass shared his vision for a Center for the Future (CFF) within the Yavapai Regional Economic and Innovation Center (YREIC), in which ERAU and Yavapai College now collaborate. Haass has proposed the CFF for the past three years as an expansion of ERAU’s efforts to create local opportunities for students and graduates. He characterizes CFF and one of its first elements, the Cyber Warfare Range, as a cyber training and cybersecurity resource for all of Yavapai County.

“Every Fortune 1000 company probably has a Global Security Operations Center (GSOC),” Haass said. “We have alumni running GSOCs for Amazon, Boeing and Facebook. Current students want to be hired by those organizations. Our training allows them to learn about it both in more of an academic setting and a real-world setting.”

He notes that as the threat of cyberattacks continues to grow, so does the demand for cybersecurity workers. “Currently, there are 11,200 open positions in Arizona and approximately 500,000 nationally. Globally, a shortage of two million cybersecurity professionals is expected by 2022, the median annual pay for a cybersecurity analyst in the U.S. has reached $92,600.”

Haass said the first step was getting people to understand the scope and impact of YREIC, which also would mentor startups via the skillsets of former and retired business experts in Prescott serving as “executives in residence.”

Next up is securing funding, which he anticipates this year from sources such as governmental programs, development funds and philanthropy. It is possible, he noted, that the unforeseen COVID-19 stimulus programs “could be a bright spot in funding so that we are able to come out of this economic slump with stars blazing. Everything has a positive if we are willing to find it.  YREIC could be really powerful. This is going to float all the boats.” QCBN