You are here: Home / Business / Elevation Coffee Brewing in Dewey 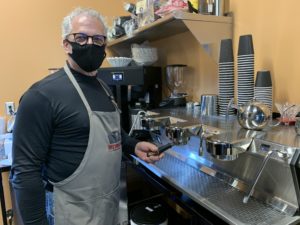 Jim Dykstra is a coffee connoisseur.

His zest for coffee led him to open his own café, Elevation Coffee, which debuted in Dewey on Dec. 15.

But that desire for the perfect cup of joe didn’t happen overnight.

In 2015, he started roasting with some green coffee beans and a popcorn popper. That experimental process eventually helped him cut back on his regular coffee expenses.

“I did it just for myself,” Dykstra said. “I was spending way too much money on coffee, buying from all these places around the United States.”

The coffee shop offers its customers a range of products, from cold-brew coffee to blended drinks such as matcha, an organic antioxidant drink with a tea base. The business also offers scratch-made baked goods daily and signature panini sandwiches.

Dykstra, 62, retired from his day job and opened the café after learning about the available property through his son, who has a neighboring business. He previously worked for Boar’s Head Provisions Co. Inc., where he was responsible for orders arriving to customers on time.

The Dewey resident says the roasting process wasn’t easy at first. He said the experimentation helped him craft the right recipe. Dykstra would log entries in a smartphone application to build graphs so he could duplicate temperatures and develop a precise method. And then he duplicated it for his favorites such as Central American and African coffees. He shared samples and small batches with friends and co-workers.

“It doesn’t cost anything,” Dykstra said. “I mean, it’s $29 bucks [for a popcorn popper] and you are roasting your own coffee, right? That’s kind of why. Then, you learn. Well, then you realize there are limitations. I can’t do enough for a week’s supply. I can only do enough for, like, the next day.”

Now, Dykstra said he strives to make “great” coffee each day. He bought premium equipment to help him and his staff adhere to a specific standard. For example, his coffee compact grinder runs with fans to help cool as it’s grinding the beans. His espresso machine is durable and delivers a robust flavor.

The business differentiates itself by having relationships with farmers and importers outside the U.S. to help ensure the company gets the freshest ingredients. Dykstra said he built contacts through research on the internet and attending industry webinars.

So far, his approach is working to attract customers. He estimates the business has received 300 positive reviews on social media, which have helped promote the Dewey café.

He said the gradual growth will help his employees work together like a symphony with few mistakes along the way. “It’s allowed us the opportunity to improve our processes,” he said.

“We don’t treat people like a number,” said Kam. “Perceptions are important. [Elevation Coffee] needs to be a place where it feels like home to them.” QCBN