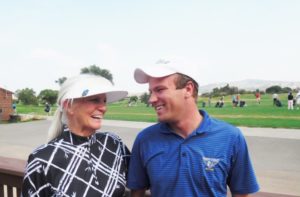 Being selected as one of only two American golfers for the second largest amateur athletic event – The World University Games (WUG) – was “…the biggest honor I’ve ever received,” said Matt Andrews, a junior at Embry-Riddle Aeronautical University-Prescott.

Andrews, from Sheboygan, Wisconsin, and his teammate, Dylan Rottner from Fort Worth, Texas, were picked from among thousands of college and university golfers across the country to represent the United States at the WUG in Taipei, China in late August.

“All of us at the university are so proud of him and excited that he had this opportunity to represent himself, Embry-Riddle and his country at this world competition – second only to the Olympics,” said Andrews’ mentor, ERAU head golf coach Kim Haddow.

More than 10,000 athletes representing 170 University Sports Federations throughout the world had students at the games. About 450 American athletes competed in more than 20 events.

Andrews is a junior mechanical engineering student. He was named the Cleveland Golf/Srixon All American Scholar of the year. He also was named an NAIA All Scholar Athlete because of his academic achievements as well as being named the Cal Pac Conference golf champion for the second consecutive year.

Haddow says Andrews has been a leader both academically and athletically at ERAU since his freshman year and a role model for both the men’s and women’s golf team. QCBN