You are here: Home / Business / Final Days of Sears at Prescott Gateway Mall 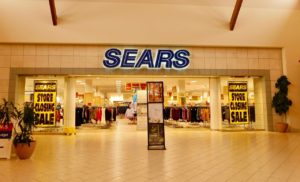 The countdown to closing the doors one last time is underway at the Gateway Mall Sears.

Officials from the management company, Transformco, in Chicago, selected the Prescott store as one of 51 Sears stores and 45 Kmart stores to be shut down after the first of the year.

It is anticipated that the retail space occupied by Sears will be shuttered in February. No plans have been announced for future occupancy of that space.

The Sears store in Prescott is the only one listed in Arizona to be closed, leaving only two anchor stores at the Gateway Mall – Dillard’s and JCPenney.

Liquidation sales began after Thanksgiving Day. Since then, the store has displayed banners and posters announcing “Store Closing” sales throughout the mall.

Sears has been at the Gateway Mall in Prescott for almost 18 years, since the mall opened in March 2002.

No specific date has been released as to when the store will close for good.

During the past few years, the company owning Sears and Kmart closed several properties in the Central Arizona region. Prescott lost its Kmart store in 2008, when it then became a C-A-L Store at 1048 Willow Creek Road. Prescott Valley lost its Kmart Store in 2016. That building was converted to Pruitt’s Fine Furniture at 7550 Highway 69.

It was a bit more than a year ago when Transformco bought the Sears and Kmart conglomerate during a bankruptcy process. In November, Transformco announced it would close 96 more Sears and Kmart stores. Company management indicated it has faced a difficult retail environment.

Founded in 1893 in Chicago by Richard Warren Sears and Alvah Curtis Roebuck, the chain, then known as Sears-Roebuck, was at one time the biggest retailer in the United States. Originally founded as a mail-order catalog store, it expanded to cities and hamlets across America. The chain reached is pinnacle in the 1970s, when other retailers such as Home Depot, Best Buy and Walmart challenged that leadership. QCBN