You are here: Home / Business / Food Park to be Developed in Downtown Prescott 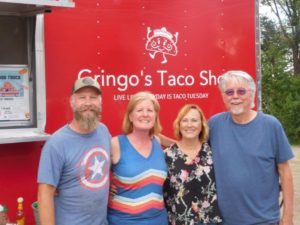 Then people can wander about, and everyone can order their own thing.

Downtown Prescott is just a few weeks from having an outdoor food court providing a variety of options for hungry customers.

The concept originated with Shawn and Holly Reddy, owners of the bright red Gringo’s Taco Shop mobile diner that is often seen around the Quad Cities. The food truck park will be at the northwest corner of Willis and Montezuma Streets, one of the busiest intersections in the downtown area.

“We bought the property in March 2018. We have been making plans for developing it since,” Shawn said. “After having designers and engineers vet our plans, we submitted them to City of Prescott authorities. Our approvals have been granted; so now, we’ll soon begin the build for the court.”

Plans show installation of full infrastructure – water, sewer, electricity – enough to accommodate the Reddy’s Gringo Taco unit as well as six other food trucks. Seating will be arranged in a semi-circle. In addition, the site will have restrooms.

“The way we planned it,” said Holly, “a family can come down into the circle – kind of like the old ‘circle the wagons’ image famous in Westerns. Then people can wander about, and everyone can order their own thing. The only restrictions will be their appetite, imagination and billfold.”

The Reddys have years of professional experience in food service preparation and delivery. Shawn started his career as a teenager in pizza kitchens. He enrolled for a degree from the Art Institute of Los Angeles-Santa Monica and worked in the kitchen for the Splashes in the Surf and Sand Hotel in Laguna Beach.

When he completed his degree, he and his wife, Holly, visited family members in the Prescott area. They liked the community so much that for a while, Shawn commuted back and forth from California so that he could be executive chef at the Rose Hotel on Cortez. Holly remained an executive office manager and administrative assistant in California with their daughter.

“I wearied of that commute after 13 months, so I returned to Southern California and got a job with the Cheesecake Factory. I then worked for ESPN Zone in Downtown Disneyland. But then I landed the executive chef’s job at Landry’s in the Chart House of the Tower of Americas in San Antonio. All the time, the charming appeal of Prescott and Central Arizona was in the back of our minds,” Shawn said.

The two finally made the big decision and returned to Prescott, where they founded Gringo’s Taco Shop July 4, 2018.

“No other food trucks in the area were doing tacos, and we wanted to be unique. The name – because we are ‘gringos’ and tacos are among our favorite foods,” Holly said.

Another customer, Joe Trudeau, recommended Gringo’s Taco Shop, saying, “It’s as good food as you can get here in Prescott.”

In the three-and-a-half years since they have been in Prescott, the Reddys have served food throughout the Quad Cities. The biggest event they catered was the Cinco de Mayo celebrations hosted by Affinity Recreational Vehicles at both its locations – one in Prescott, the other in Prescott Valley. “Hard to believe, but honest – we served more than 5,000 people during those days. We were exhausted,” Shawn said. “But we loved meeting the hundreds of hungry customers.”

Their second biggest event was the Fourth of July. “It seems we always have a line of 20 deep – until the fireworks start. By then, we are worn out,” Holly said.

They also cater private events such as wedding or birthday parties. Their biggest private event involved serving 325 people for a wedding. “I don’t think we’d do that again,” said Shawn.

The Reddys are eager to open the food court. “We just so want to help the other business owners who are just starting. We’d so love to see some that specialize, like desserts or other ethnic foods. We do hope to remodel our own food truck – add a sliding window to take orders and attach a front and back awning,” Shawn said.

The Reddys stay busy most of the year. Their busiest season is May through October. Usually, the couple tries to be open from 11 a.m. to 3 p.m., Monday through Friday, but during special events or holidays, they meet the needs of the crowd. QCBN