You are here: Home / Local News / From Earth to Space and into NightVisions 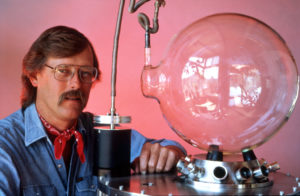 Prescott sculptor Joseph McShane finds inspiration in the night sky and beyond.

Prescott sculptor Joseph McShane’s style might be considered other worldly. He has engaged outer space and the sun to co-create with him and is the first artist to have his work leave this planet and travel with astronauts on board the space shuttle to be created in the vacuum and weightlessness of the space environment. A photograph of his sculpture titled S.P.A.C.E. will be part of NightVisions: Cultural Interpretations of the Night Sky, an exhibition running May 21 through Aug. 27, at the Coconino Center for the Arts in Flagstaff.

In 1984, McShane worked with NASA’s Small Self-Contained Payload Program to conduct a Space Shuttle experiment. Nine glass spheres were placed in the cargo bay of the Challenger. As he explains it, small coils in the smaller bubbles were coated with gold, platinum and other elements, and when, at the direction of the payload computer, the coils heated in the vacuum of space, it caused the material to vaporize and flash out to coat the inside of the spheres and change the clear glass to a wide spectrum of color, “in much the same way that a pair of mirrored sunglasses would be coated in a vacuum chamber,” he said.

McShane could have created the same experiment in his own vacuum chamber without leaving Earth, but the shuttle program provided him with the only way to create art in space, which he was excited about. Unfortunately, the project became more complex than he ever imagined, taking seven years from conception to completion. “After all the years of technical work, at times, I wanted to use a sledgehammer on it,” he joked, recalling his frustration with what seemed like an endless process.

Nonetheless, as the shuttle lifted, a valve on the larger sphere opened and remained open for the seven days of the 3.3-million-mile mission. “Earth’s atmosphere escaped from inside all nine spheres and they became one with the vacuum of outer space,” he said. “The valve closed on the largest sphere before the shuttle re-entered the  atmosphere, capturing the vacuum of space and returning it to Earth.”

McShane is used to having his artwork receive a lot of attention. His sculptures are often large and at times affected by the elements. For example, his heavy copper and brass piece, The Good Adventure, glistens in the sunlight at the Richard Marcusen Sculpture Garden at Yavapai College. It was created to evoke images of the Industrial Revolution and early mining and railroading in Yavapai County, he says, a time when large metal objects were joined together with mechanical fasteners like rivets, nuts and bolts. Over time, the sculpture’s interaction with the arid high desert environment is turning The Good Adventure’s brightly polished finish to a dark patina.

Another example of his work, Spectrum, can be seen at the Arizona Science Center in Phoenix, both inside and outside the building. The huge sculpture, beginning with the light emanating from the sun, transforms visible sunlight into the colors of the spectrum to dance across the Dorrance Planetarium’s exterior walls.

For the spring/summer NightVisions exhibition, McShane served as one of three jurors to help select art pieces from around the world. “It’s an eclectic exhibition, very different in some regards from any show I’ve juried in the past,” he said. “It was enjoyable and brought a certain diversity. One really interesting piece is a video submitted by a park ranger, who is a dark-sky advocate, from the Grand Canyon National Park.”

“We are thrilled to have Joseph’s participation,” said Julie Comnick, exhibitions and programs director for Coconino Center for the Arts. “NightVisions is an elegant synthesis of contemporary artworks and astronomical artifacts that brings the vastness of the night skies into contemplative reach.”

“The exhibit will offer a better understanding of how artists view the night sky,” said McShane.

This eighth iteration of NightVisions, presented by Creative Flagstaff and the Flagstaff Dark Skies Coalition, features astronomer Carolyn Shoemaker, one of the greatest comet hunters of all time. She found a total of 32 comets and, according to the IAU Minor Planet Center, 377 asteroids, of which 160 were her sole discoveries.

“We are excited to showcase Carolyn’s legacy as a dedicated Flagstaff astronomer, along with her collaborations with her husband, geologist Eugene Shoemaker, with the inclusion of archival astronomical elements alongside the work of contemporary artists,” said Chris Luginbuhl, president of the Flagstaff Dark Skies Coalition, a non-profit organization that created NightVisions in 2001.

Carolyn, who became an astronomer at 51, is best known as part of the team that discovered the comet that crashed into Jupiter. “I do not know what I have, but it looks like a squashed comet,” she said about the fragmented comet pulled apart by Jupiter’s gravitational pull, which she discovered with her husband, Gene, known as the Father of Astrogeology, and astronomer David Levy in 1993. Sixteen months later, the Shoemaker-Levy Comet dominated the news with the cosmic collision viewed around the world through telescopes and on television as it slammed into Jupiter.

Along with Levy, Carolyn and Gene’s children, Patrick Shoemaker and Christine Abanto, are part of the NightVisions planning team. “Our parents were always close – she was not the wife who stayed at home – and they’d take us along on their adventures,” said Patrick. “I remember being out there camping with my parents before I was old enough to remember much of anything.”

Levy will be presenting during the opening public reception, scheduled for 6-8 p.m., Saturday, May 21. “We never really worked – it was so much fun!” said Levy of his time observing the night sky with Carolyn. “We were kidding each other constantly!”

Carolyn died last August at 92. “I don’t know of anyone more passionate about the night sky,” he said. QCBN

For more information, visit https://www.ccaflagstaff.org/nightvisions-2022 or