You are here: Home / Business / Gluten Free is Good for Business 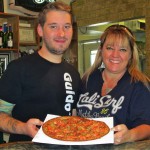 When the notion of gluten-free diets first emerged, it seemed like a New Age food trend or the latest fad diet. But, its popularity didn’t fade. In fact, when it hit the mainstream, manufacturers took notice and began spending millions on research, development and marketing a variety of more tasty, gluten-free products. Stores like Trader Joe’s, New Frontiers and Wal-Mart added gluten-free selections to their stores.

New Frontiers in Prescott began experiencing a demand for gluten-free items several years ago. Chris Larson, marketing manager for the store, said the deli, frozen and grocery departments have seen a “huge” increase in the availability of new, gluten-free items.

“Being the kind of store we are, we were getting requests from people shopping for information. In the last year or two is when manufacturers really got on board,” he said.

“Just about every day we have the opportunity to get a new product. The category has grown. The deli has been key in gluten-free movement and making sure there are choices out there for people with gluten issues.”

He said, in the past, out of 25 items in the deli’s fresh case, there may have been one or two gluten-free items. Now there are six or seven.

Bill’s Pizza not only offers gluten-free pizza, but gluten-free beer. “It’s been trending for quite a while,” said Michael Perner, kitchen manager.

He said the company just wanted to offer the alternative to those with serious gluten allergies and for those who are practicing the lifestyle for better health. And business is booming.

“At first we didn’t sell very much, but now we go through cases and cases of gluten-free crusts,” he said, adding that the crusts are one of the few things not made on site.

As for gluten-free beer, it has not caught on as much as the pizza.

“Once again, we went out and found the best gluten-free beer we could,” he said.

The owners of Sweet Anne’s Café in Prescott are very serious about offering a gluten-free menu to their customers. “We have a strict policy of cleaning everything to avoid cross-contamination and make sure the condiments we use are labeled gluten-free. We use separate toasters for our bread,” said Valerie Haugh, who owns the café with her sister, Chalinda Wilkerson. “If you are going to do it, you want to do it right.”

She estimates about a third of their customers come for the gluten-free menu. “That is growing as word gets around that we are serious.”

Even in restaurants that do not offer a special menu for those going gluten-free, there are menu items that they can eat.

Dawn Foster of Emmanuel Café and Bakery in Prescott Valley said the business has been open only about two months and they are glad to cater to those on gluten-free diets. “We have items such as salads and lettuce wraps or meat and cheese platters,” she said. “I would never send anyone away hungry. It’s like going home to your Mom. They keep nagging at you until you eat something.”

In the past, people knew that grain products were in their bread, pizza and beer, but today it is sometimes hidden – used as a binder or filler in such products as ice cream, blue cheese, soy sauce and curry powder. It is even used on dried fruit to keep slices from sticking to each other.

The federal government has gotten into the act by setting new standards, which go into effect next year. The new regulations demand a food product cannot be labeled “gluten-free” unless it does not contain any type of wheat, rye, barley or crossbreeds of these grains.

That is good news for the estimated three million Americans who suffer from Celiac Disease, an autoimmune disease that causes the small intestine to become inflamed when they consume wheat and other grain products. Those who suffer from the disease can have persistent indigestion, chronic diarrhea, bloating, abdominal pain or a number of other symptoms. Those with sensitivity to wheat can suffer similar symptoms.

Gluten-free products have turned into a $2.6 billion a year industry, which has increased 30 percent during the past five years and is growing.

But a gluten-free diet may not be for everyone according to doctors, because cutting grains out of a diet may dangerously reduce needed vitamins, minerals and fiber. Eating a balanced diet including grain products can lower the risk of heart disease, Type-2 diabetes and some forms of cancer. QCBN