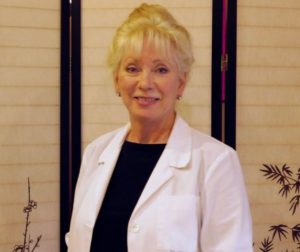 The pain got so severe in his lower back and leg that Les Fullerton was considering back surgery. A friend suggested he first see Jean Painter of Harmony Integrative Medicine in Prescott.

Fullerton is glad he did.

After about 12 visits for acupuncture with Painter, he is 100 percent free of back pain.

“I had met with a spine surgeon, and was looking into spinal surgery. That option is no longer in the picture. I don’t have back pain anymore,” Fullerton said.

Fullerton is not the only one who has had excellent results from Painter. There is a book in her office packed with hundreds of thank you letters from grateful patients. They say she is a whiz at relieving headaches, back pain, digestive issues and general aches and pains.

“She has been my acupuncturist for about 10 years,” said Martha Beckham, a patient who had a ringing in her ears. Her doctor at the Mayo Clinic told her if the acupuncturist was helping, to go back to her. “That is when I knew it was something – when the medical profession thinks it is good. You want to avoid drugs.”

“The veteran’s administration sends me their pain patients, their neuropathy patients, the wounded warriors,” said Painter. “We can give them their lives back. We are 90 percent successful; plus, studies show that acupuncture can cut back or eliminate their opiates and neurological medications.”

Painter says she is grateful to her mother for the life she has now, spending her days helping others find relief from pain of all kinds through acupuncture, herbs, specialized diets and exercise.

“My mother had suffered from COPD for the better part of 25 years. She didn’t die from her disease, she died from the medicines she had been taking over that time. She suffered horribly,” Painter said. “I thought there must be another set of tools out there to deal with the treatment of chronic illnesses.”

Painter looked into both Chinese and mainstream medicine. She liked the idea of Eastern medicine because it is a comprehensive healthcare system that is 3,000 years old. She made the decision to return to school at age 44. She was accepted at the prestigious Yo San University in Santa Monica after taking required prerequisite pre-med classes, which she describes as “brutal.”

After graduating, she opened her own practice in Los Angeles.

Before moving to Prescott in 2004, she sent out letters to local healthcare providers introducing herself, telling them about her education and letting them know she was moving to the area.

“I got a positive reaction,” she said. “I worked for Wayne Bennett [a Prescott chiropractor] for a year and then moved into my own space in 2004. There were not too many of us at the time. There was a great need. I was fortunate enough to have an extensive education, and that helped me. I also had a good marketing sense and background.”

She chose Prescott because she had always wanted to live in the forest.

“It is wonderful. The community is very kind and very welcoming. Everyone’s Home Town. It feels like people are happy to be here.”

The daughter of a physician, Painter was born and raised in Indianapolis. She started out in journalism at Indiana University, but in the late 1960s and early 1970s, she struggled to find a news job.

Discouraged, she went into property management for 25 years. However, her mother’s illness was the impetus for a career change.

“I specialize in chronic illnesses, like digestive and neurological. I do acupuncture for back pain or achy knees and elbows.”

She also uses herbs and specialized diets. Painter is certified as a diplomat in oriental medicine, Chinese herbal medicine and acupuncture. She is also licensed by the state of Arizona to practice.

“She is wonderful, very professional. Her technique is just great,” said Valeska Brown, a long-time patient. “She is one-of-a-kind in this community.”

Painter has had great success in treating digestive illnesses such as irritable bowel syndrome and can knock out headaches and back pain.

“Within a few days, we can stop the severe diarrhea and the pain and cramping,” she said.

“My husband is 97 and has had severe arthritis,” said Norma Love. “Since he has been going to her, he has not needed the medication he had been taking.” QCBN

For more about Painter and her business, call 928-776-4895 or visit harmonyintegrativemedicine.com.