You are here: Home / Business / Hopi Artist Uses Art to Heal Other Veterans 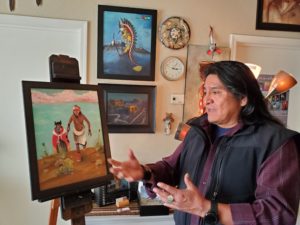 Prescott artist and U.S. Army Veteran Filmer “Fil” Kewanyama draws on the ceremonies and symbolism of his Hopi heritage to portray the ancient spiritualism guiding his people.

“The majority of my work depicts and chronicles the Hopi way of life,” Kewanyama said. “What I feel and know is very important and sacred to me. One meaning of the word Hopi is ‘peaceful.’  We are encouraged to live good lives by being at peace with ourselves and everything around us.”

Through his paintings, digital art, oil-based clay sculpture, pencil sketches and other art forms, Kewanyama illustrates that journey of peace in growing up between two cultures: American and Hopi.

Artistically expressing himself as Yoimasa – one of the many Hopi names given him by his father’s Water Clan – Kewanyama described how a child is born into the Hopi matriarchy. The name Yoimasa translates to “when the rains are coming, you look into the horizon and see rain clouds as they are flying towards us.” A Hopi life consists of many ceremonies and initiations.

“Everything that I create is about how we Hopi are living today,” Kewanyama explained. “All the ceremonies have been passed down by our ancestors and we are still living that today in the modern world of going to school, working a job and paying our bills.”

The 2010 U.S. Census reports 15,000 Hopi live on and off the Hopi Reservation, encompassing 32 clans and 12 villages across 1.5 million acres in Navajo and Coconino counties. Tradition holds that the clans ascended from the Grand Canyon. Their kivas (ritual chambers) echo that origin, built below ground and accessed from above via ladders.

“My artistic influences come from what I know of Hopi history and my own personal interpretations of that history, fueled by my own personal feelings,” Kewanyama said. “As a child growing up on Hopi Land, I learned through our initiations the ceremonies that our ancestors passed on to us.”

Now working from a studio in the Sixth Street Business Park, he welcomes private showings by appointment. His paintings and sketches colorfully and elegantly adorn the walls and delicate oil-based clay sculptures rest atop furnishings in the studio/apartment. A two-room gallery also highlights his work and that of his girlfriend, artist MaryHelen Ewing.

Kewanyama says he came to Prescott in 2004 to be treated by the Veterans Administration (VA) for Post-Traumatic Stress Disorder (PTSD). “The VA here is one of the best in the country. They really worked with me and healed me.”

After 21 years of military service and retiring as a First Sergeant, Kewanyama earned an associate’s degree in graphic design with a fine art emphasis from Yavapai College in 2010.

“My art is very therapeutic and it helped me on my healing journey,” he said. “It has given me a lot of healing – physically, spiritually and emotionally. I share creative art healing with other veterans at the VA. It helps us to heal ourselves from whatever has affected us with service.”

He currently is showing several pieces in the “Under Native Skies” exhibition through July 25 at The Phippen Museum. A four-time national award-winner in the VA’s annual arts competition, he most recently was awarded first place for his painting symbolically honoring Hopi Code Talkers. That creation is on display at The Phippen.

A 10-year board member of the ‘Tis Art Center and Gallery in Prescott, Kewanyama curates an annual show featuring Native American artists.

Often a katsina will be included in Kewanyama’s art. The katsinam (plural) are benevolent spirits who return each year from January through July to guide the Hopi in spirituality and survival. It was the katsinam, he says, who taught Hopi people to harness the elements for dry farming in ancient times.

“Katsinam dance in the plaza and the kiva, and we give them offerings and prayers,” Kewanyama said. “We depend on the earth to nourish our plants, and pray for water to fall on us and feed us, not just for the Hopi people, but for every living thing. A lot of what I paint has to do with that. Most of my paintings include rain clouds, the sun, the power of the universe, lightning, water, animals and people. It all comes together to symbolize the universe and everything that surrounds it.”

Each of his creations tells a story. “People have a better connection to the painting when they know the story. I grow spiritually and professionally as an artist by sharing my Hopi lineage with others, so that they know who my people are.” QCBN