You are here: Home / Community Profile / Jeff D’Arpa is the Man Behind the Adventure 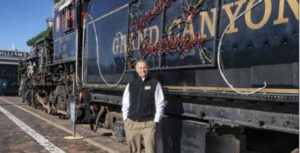 Going to work in places where he could play is what Grand Canyon Railway and Hotel General Manager Jeff D’Arpa had in mind while growing up, and that’s exactly what happened.

With ski resorts, national parks, hotels and now the Polar Express and Grand Canyon Railway in his professional queue, D’Arpa has completed 25 years with the Xanterra Travel Collection.

In his new position as Grand Canyon Railway and Hotel General Manager, D’Arpa oversees 280 to 340 employees and said, “The team I work with is outstanding and makes this a manageable assignment. To be able to incorporate trains and hospitality at this scale is a unique opportunity and I cherish the challenge it provides me.”

D’Arpa’s career began at Deer Valley Resort in Park City, Utah, where he began working in the ski shop. “My goal was to manage a ski or golf resort,” he said.  Again his dream was fulfilled as he stepped into the role of restaurant manager at Deer Valley.

When the snow melted, D’Arpa took off to work at the North Rim of the Grand Canyon as a food server in the summers. He stayed busy hiking the Grand Canyon trails and climbing the corporate ladder.

Starting as a food server for Xanterra Travel Collection in 1996, D’Arpa was able to work his way up to management.

Chief Parks Officer Gordon Taylor has worked alongside D’Arpa for many years. “He certainly has integrity, intelligence and the energy to get things done.  I am a very lucky man to have the honor to call Jeff both a teammate and a friend.”

Along with his responsibilities at the Grand Canyon Railway and Hotel, D’Arpa also oversees the Grand Hotel in Tusayan and the Tusayan Trading Post.

Born in Yonkers, New York, where he spent his formative years, D’Arpa moved to Florida when he was 16. While working at the North Rim of the Grand Canyon, D’Arpa would visit Flagstaff in the mid ‘90s. “I always enjoyed the atmosphere, lifestyle and community. I also had some great friends from back East relocate to Flagstaff, making our transition to the area quite easy.”

The Grand Canyon Railway Hotel is located in Williams and has daily round-trip excursions to the Grand Canyon. The Polar Express will run through Dec. 30. For more information, call 888-848-3511.

Biggest Influence
I’ve been fortunate to work for Xanterra’s Chief Parks Officer Gordon Taylor since 1996. He has trusted and supported me through all my years with Xanterra, allowing me to grow and enjoy many achievements both personally and professionally.

Favorite Places to Visit
The bottom of the Grand Canyon and top of Humphreys Peak. To have these gems in your backyard and not make regular pilgrimages to enjoy them wouldn’t make sense to me.

The Last Time I Laughed My daughters make me laugh all the time. Somehow they are the funniest humans alive. Any of their TikTok videos put me in stitches.  QCBN