You are here: Home / Spotlight / Karen Fann is Poised to Lead the State Senate 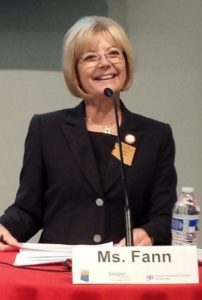 For more than 25 years, Yavapai County resident Karen Fann has been in the public eye.

That visibility will continue. Fann was elected to another term as a state senator for District 1, which covers more than 8,000 square miles of Yavapai County and portions of Maricopa County. She beat out opponent Jo Craycroft, 54,952 to 23079 votes.

To add to her victory, Fann was selected by her peers to serve as president of the Arizona Senate in the coming year. That powerful role allows her to control legislation introduced and the selection of committee chairs.

Fann is well prepared for her influential role. A lifelong Republican, she had been a powerful member of the Arizona House of Representatives, where she was first elected in 2011 and served until she became a senator in 2016.

Fann told the Quad Cities Business News, “My primary legislative obligation will be to represent not only the people who elected me, but also the greater population of Arizona. We’ve some major issues to be faced at the Capitol. We can’t let partisan politics get in the way of what is best for Arizona.”

She cites three big concerns ahead.

One is the prolonged drought and potential water shortages. She says water policy must be revisited and revised to reflect realities of domestic, commercial, industrial and agricultural growth and expansion in Arizona.

Another is identifying sources and improving sustainable funding for state-supported public education from preschool through the university level. She believes education must become a major priority and the diversion of funds designated for education must be eliminated.

And, she says, school safety and public safety must be given more attention with students, school personnel, law enforcement and first responders receiving conspicuous support at all levels of government.

“We’ve got to stop letting politics get in the way of working together and cooperating to create good policy, not partisanship,” she said. “We’ve also got to move forward to assure that rural Arizona is not bypassed in critical legislative action. There’s no reason rural communities can’t cooperate and make sure they are represented respectfully in the legislature.”

Fann is firm about sticking to her principles in her role at the Senate. “I have two rules I will follow. First, I will respect everyone. Second, I will never blindside someone. I will be honest, ethical and forthright – and I will listen, not ignore.”

When parents Jim and Sylvia Fann arrived in Prescott in 1958 to raise their four children, the Fanns became prominent in Prescott. Jim Fann is gone, but Sylvia remains in Prescott. Karen’s brother, Mike, is owner and CEO of Fann Contracting. Sister, Sarah Fann Bird, earned a graduate degree, lives in Peoria with her husband and works for a national telemedicine firm.  Her other sister, Gail Fann Thomas, has a doctorate degree, and lives in Monterey, California with her husband. All family members routinely convene in Prescott and contribute in one way or another to their hometown.

For a short period, the Fann family lived in El Cajon, Calif. While there, Karen completed high school, where she was a musician, athlete and student council member. She also was president of Y-Teens.

When her family returned to Prescott, she moved to Hawaii as an airline executive. She returned to the mainland to become operations manager for Scenic Airlines in Las Vegas, but soon decided she wanted to return to Prescott. She gained experience as a legal assistant for Yavapai County.

With just $500, she launched her own business in 1984, Arizona Highway Safety Specialists. In the 34 years since, it has grown into Arizona’s largest installer of roadway guardrails and signage.

Fann has been married to Jim McKown for 11 years. “Jim and I had met at the Palace Saloon in Prescott and really got along. But when we decided to get married, we went to Hawaii. My immediate family also decided to go to Hawaii for a big family Christmas vacation. It was then Jim and I surprised them by getting married in Kona. What a great time.”

Among her public contributions:

Fann’s dedication to her responsibilities is legendary. In 1992, she broke her pelvis in five places while in Telluride, Colorado, and was hospitalized in Montrose until she was transported to Yavapai Regional Medical Center. Just days later, she attended a Prescott City Council meeting on crutches.

What the best advice you ever received?

“Brad Newman, longtime executive director for Yavapai Exceptional Industries, looked me straight in the eye when I first ran for office. He said, ‘Always be true to yourself.’  I’ve always tried to follow it.”

Where’s your favorite place to vacation?

“No doubt about that – Kona, Hawaii, where Jim and I got married. And great golf.”

What’s your favorite form of entertainment?

“Reading a good book – like some of John Grisham’s – or watching a good movie. I just enjoy escaping to another world.”

When’s your best time of day?

“Anytime I am with friends. They are what really count.”

What character trait do you admire the most?

“Honesty. I can have differences and disagreements with people, but I hate being lied to. Just tell me the truth.” QCBN

Arizona District 1 Senator Karen Fann was re-elected to the Arizona legislature by a more than two-to-one margin in the Nov. 5 election. Fann has been named president of the Arizona Senate for the coming year.