You are here: Home / Columnists / Leaving His Marx 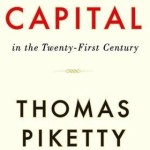 For a book junkie like me, reading a great book isn’t enough. Perusing reviews both before and after only adds to the pleasure – not to mention the knowledge – one can glean. I only hope my readers sometimes feel the same. That is the experience I’ve had lately reading about “Capital in the Twenty-First Century” by French economist Thomas Piketty. Commentators from both left and the right (and several best described as in between) only whetted my appetite for the book itself.

Published in French in 2013, the English version appeared last month. The hardcopy edition went quickly out of print leaving only the digital option from Amazon and other outlets. Piketty’s deeply researched work was declared “important,” by reviewers. In its March 31 and May 5 issues, The New Yorker reviewed not only the book but also another reviewer – Paul Krugman, depicted by Jonathan Blitzer as a near-groupie, meeting Piketty for the first time (and worrying about pronouncing his last name – it’s Peek-et-ee).

Krugman produced his own enthusiastic but balanced critique in The New York Review of Books, declaring the work “superb.” British publication The Economist dubbed Piketty “a modern Marx,” naming his book a “poor guide to policy,” though a “blockbuster” and “a great piece of scholarship.” GQ recommends dipping into it, but not all in one go. Piketty is an opportunity for The Nation to explore current views on capitalism, socialism and inequality.

To sum up the various reviews with a quote from The Nation’s Timothy Shenk, “’Capital in the Twenty-First Century’ stands a fair chance of becoming the most influential work of economics yet published” in this century. My time was well-spent reading reviewers’ accounts of Piketty’s life and influences (both personal and academic), and the anticipated impact his book might have (and is having) in the ongoing debate over income disparity in the U.S. and globally.

Piketty is truly an economist for our time. Inequality of wealth, the focus of his book, is hardly a new topic. If it has gained prominence in public debate over recent years, we can look to the recession as well as high profile protests like Occupy Wall Street – which may have failed according to some accounts, but made many others acutely aware of the stark differences between the one and the 99 percent. The Nation also gives credit to emerging millennial intellectuals who have made wealth disparities a centerpiece of social critique.

To understand the evolution of income equality over time, Piketty and his team investigated tax records and other data in a number of nations beginning with their first use of progressive taxes. Concentration of capital through inherited wealth is a noteworthy culprit. According to Piketty, “When rate of return on capital significantly exceeds the growth rate of the economy, inherited wealth dominates,” by a wide margin over wealth from labor. In other words, hard work is unlikely to right the balance unless you are also named in your rich – and very elderly – uncle’s will.

Unsurprisingly, for some readers, education (in Piketty’s terms, “the diffusion of knowledge and investment in training and skills”) push the economy toward convergence, or the reduction of inequalities. While the law of supply and demand also contributes to convergence, the effect is far weaker, in Piketty’s view, than widespread education.

If you don’t know your Marx and Kuznet (the latter, a 1971 Nobel Laureate best known as the first to use a long-term approach in income analysis), no need to shy away from this book even though the author draws on both thinkers. Whether it is thanks to Piketty or his translator, a degree in economics is not required to appreciate his claims. For those who suspect Marxist thinking might figure too prominently in Piketty’s thinking, the author has made clear, in interviews, that he is no socialist. His interests lie in using both mathematical expertise, and the diligence of detailed research to produce an account of how wealth accrues, over time, into the hands of the few. It’s not his data – it’s what to do as a result – that has people talking. Read the book soon, and get in on the conversation.    QCBN