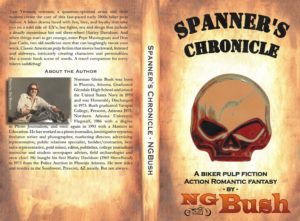 His recent book release, “Spanner’s Chronicle,” available on Amazon, is a fanciful fictional romp through the motorcycle culture of the 2000s. The genre, biker pulp fiction-action romantic fantasy, has been given some high praise.

“No biker foreplay here, this is the act of narrative love itself, a bouncing, boisterous story that moves from split second overdrive through the complex survival mechanisms of the heart,” said Los Angeles Woodbury University College Liberal Arts Dean Reuben Ellis, Ph.D.

A release party for “Spanner’s Chronicle” is scheduled at from 4-6 p.m., Thursday, Dec. 5, at Raven Cafe, where a limited release of signed copies will be available. “If you have the ability to download this book, I will be offering a special promotional offer of the ebook for a $1.99 starting Dec. 5, ending Sunday, Dec. 9,” said Bush.

“It will be a night of activity, that’s for sure, we’ll also have a Stone Brewing tap takeover, and, at 7 p.m., we’ll feature our Jazz Jam Night,” said Raven Cafe General Manager Tiana Costello. “We’re really happy this fit into our schedule.”

His second book of this two-part series,
“Taylor’s Ride,” will be available shortly after the first of the year. QCBN