You are here: Home / Local News / Making a Great Commotion 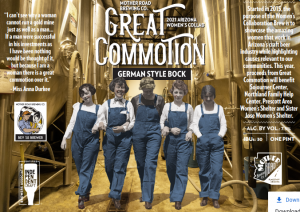 We can thank Mother Road Brewing Company for digging up this gold nugget about Miss Anna and naming a brew in her honor.

Miss Anna Durkee made history when, acting on a tip, she purchased gold mining property near Oatman in 1914. Two years later, the Wichita Daily Eagle reported that it was for “an insignificant sum.” The headline read, “Tip Gave Her a Fortune.”

Miss Anna, who had become one of the world’s foremost women mine owners, was not flattered by the attention. In fact, she seemed annoyed. “I can’t see why a woman cannot run a gold mine just as well as a man,” she told the reporter. “If a man were successful in his investments as I have been, nothing would be thought of it, but because I am a woman there is a great commotion over it.”

That’s right, Miss Anna! Some of us will continue to make a great commotion over your success because, for one reason, the right for women to own property in the United States was an evolving process that continued even into the 20th Century!

We can thank Mother Road Brewing Company for digging up this gold nugget about Miss Anna and naming a brew in her honor. Mother Road’s Director of Arizona Craft Beer Stephanie Henderson says every year since 2015, “the Women’s Collaboration Brew showcases the amazing women who work in Arizona’s craft beer industry while supporting community organizations.”

Staying true to Mother Road’s pioneering theme, the folks at the brewery featured Miss Anna and her story with the Women’s Collaboration craft beer called “Great Commotion” in 2021. Proceeds from Great Commotion benefited women’s shelters across the state, including Prescott Area Women’s Shelter and Northland Family Help Center. And that’s a legacy worth touting, Miss Anna!

I’ve been thinking about the character of this gold-mining pioneer woman while reading “What Will They Say About You When You are Gone?” Author Rabbi Daniel Cohen encourages readers to live inspired, celebrate the gift of every moment and make courageous choices that reflect core values.

“The word ‘courage’ derives from the Latin root cor, which means ‘heart,’” he writes. “A courageous choice is based on inner principles and not external pressure. A courageous choice emerges from a steadfast commitment to our values.”

I’m guessing Miss Anna was courageous, full of heart and too busy with the challenges of running mines to wonder what anyone else was thinking about her, especially not a newspaper a great distance away or one operating more than a century later. But that’s the thing about having the courage to take actions rooted in our hearts, in our inner principles. We should be intentional with our choices, because others might be noticing and talking about us when we’re gone, maybe even 100 years from now!

As Rabbi Cohen points out, “Oftentimes the route to building character and influence hinges on our choices – both large and small – that we make every day.”

Cheers to Miss Anna for making courageous choices, to the Wichita Daily Eagle for recognizing her work and to Mother Road Brewing Company for honoring and building on her success. QCBN