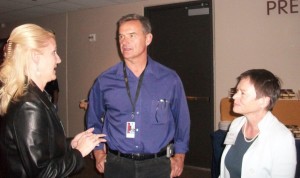 Saying she sees nothing but positive population growth and solid economic development in the area, Northern Arizona University President Rita Cheng says she expects considerably more university activity in the future for the greater Prescott area.

Noting that the NAU-Yavapai branch campus is now in its sixth year of operation, Cheng points out that more than 200 students are currently enrolled in degree programs there. She also says the Alumni Office has identified more than 3,000 alumni in the immediate area.

“Knowing the workforce needs in the area, we at NAU envision expanding our programs and curriculum to help meet those needs. We’re especially pleased to have so many positive and productive relationships in this community with individuals and businesses who are willing to support what we envision,” she said.

“We are excited at the potential of helping the university in grow,” said Jeff Wasowicz, a partner in the Fain Signature Group. “Expansion of the university is just another indication of positive growth in the community and area. The university’s influence is another step necessary in our growing community.”

The Fain Signature Group has been a leader in developing the 640-acre downtown area into a comprehensive retail and business community coupled with a variety of contemporary residential sub-divisions.

Prescott Valley Town Manager Larry Tarkowski says the town appreciates the growing partnership with NAU. “We certainly share in its goals of increasing post-high school academic production in central Yavapai County. In the same way that NAU is a job creator within the City of Flagstaff, we in Prescott Valley look forward to the positive economic force that NAU will become here.”

Since 2010, when the state university created its NAU-Yavapai regional campus as a partnership with Yavapai College and the Town of Prescott Valley, it has served hundreds of students and is continuing to grow, according to Susan Johnstad, assistant vice president and campus executive officer.

“We’re especially delighted at the energy and support that President Cheng has brought to our campus,” she said. “Our programs are growing, and we see more and more opportunities for student to have a genuine university experience.”

Johnstad also noted that the current program provides “…an affordable university education at an accelerated rate. In fact, it allows students to earn a bachelor’s degree in as little as three years while at the same time preparing them for employment or for graduate school.”

The full-time tuition rate for NAU-Yavapai students this year is $5,562 – about half the cost of the other state universities.

Johnstad says the courses at the NAU-Yavapai campus are a blended format, combining the best of traditional classrooms with the flexibility of online education.

President Cheng was recently in the Quad Cities for the NAU-Arizona State University hockey match between the club teams at the Prescott Valley Event Center where she ceremoniously dropped the starting puck.

“I hope this will be the first of many NAU opportunities to participate in activities in the area,” she said.

It was the first time the center has hosted a hockey game in two years since the defunct Central Hockey League’s Arizona Sundogs suspended operations.

Despite an enthusiastic crowd cheering for the NAU Lumberjacks, the ASU Sun
Devils dominated, winning 5-1.