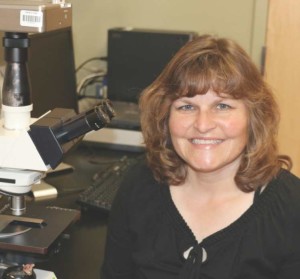 Climate change models project that pinyon pine trees could disappear from the Arizona landscape by the year 2090. But the discovery of a new species of fungi reveals that some of the trees are receiving a microbial boost from the roots that are making the difference between life and death.

Biologist Catherine Gehring has been studying why some pinyon pines survive a drought when others do not. She has found that some of the trees are genetically drought resistant, like the pinyon pines growing in the dry, stressful environment of the nutrient-poor cinders around Sunset Crater Volcano.

“These drought tolerant trees are always associated with these same fungi and those seem to be what really helps them survive dry conditions,” she explained. “These fungi bring in soil resources and the drought tolerant trees recruit this group of fungi from a division called the Ascomycota. We actually ended up describing a new species call Geopora pinyonesis. It hadn’t been described before and it seems to be really good at promoting tree growth and survival during drought.”

Gehring says the fungal filaments can be seen all around the cinders in the forest. They can reach into nooks and crannies, where tree roots cannot go, to access nutrients for the trees. “The beneficial microbes have been called rock-eating fungi because their enzymes can break down rock to make soil.”

As they do this, Gehring says, they release nitrogen and phosphorous, important elements for tree growth. The fungi also bring water to the pinyons through the root system.

“The fungi are morphological connected, physically interwoven, to the pinyon roots. Under a microscope, you can see that they’re not just right around the outside but also invested in the tissues of the roots.”

In exchange for nutrients, the trees transfer sugars to the fungi that they produce through photosynthesis. “It’s a very symbiotic relationship,” she said.

But, this fungus only seems to attach itself to pinyon pines with drought resistant DNA. “Initially, it was surprising to us that you would have what seemed to be a genetic predisposition to get certain kinds of fungi on your roots as a plant. But we see evidence of that now in studies on humans where they’re looking at the human micro biome and finding that the genetics of the person influences which community of bacteria they’ll get on their hands.”

Gehring says she has done reciprocal transplant experiments in her lab at Northern Arizona University. She has tried to give soil with the drought-tolerant microbes to a drought intolerant plant. But, it does not work.

“Instead, they take this other community of fungi. It’s a function of interaction between the plant and the fungus that determines which species are on the roots and we don’t know the details of that, but we can’t seem to force those fungi onto each other.”

Gehring had been hunting for the defining characteristic – the mushroom that identifies the fungus – for years. In March 2013, a researcher brought her a tiny cup-shaped mushroom found in the pinyon-juniper woodlands. “It was nice to actually see it and find that it matched with the DNA sequencing to the thing that we had been looking for.”

Gehring is hopeful her findings will help lead to successful restoration efforts where warming conditions have killed vast areas of pinyon pines.

“If you’re going to try to plant in places where we’ve had high mortality and you want the species back, then you might be thinking, ‘Well, which seeds should I plant?’ We’ve identified drought tolerant plants, so we can get the seeds from those. And then we can look at what microbes are in the soil. Our research here in the pinyons and also in other systems really suggests that thinking about the soil and the microbes that live in the soil with the plants are probably going to really be key.” QCBN