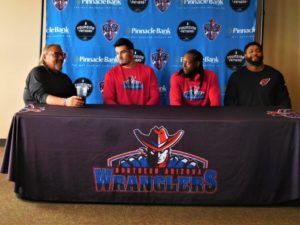 Having the Wranglers Professional Indoor Football Team here in Prescott Valley is a major economic driver for the town and businesses in the area.

The opening kickoff for the newly-founded Northern Arizona Wranglers (NAZ Wranglers) means more than just another spectator sport in Prescott Valley. It has the potential for generating substantial income for local restaurants, bars, stores and hotels – and create tax revenue for the community.

“Having the Wranglers Professional Indoor Football Team here in Prescott Valley is a major economic driver for the town and businesses in the area,” said Cutter Chamberlain, economic development coordinator for the Town of Prescott Valley. “Not only does it provide an exciting form of entertainment for our locals, but it also increases consumer spending. It will increase tax revenue for the town and, certainly, increase tourism to the region.”

The pre-game tailgating parties and season opener attendance on May 16 provided solid support for Chamberlain’s prediction. Fans of all ages packed the parking lot and, later, nearly filled Findlay Toyota Center (FTC) for the inaugural game of the season.

Donna Werking of NAZ Social, who handles press relations for the Wranglers, said the arena seats 4,800 people and by Mother’s Day, May 9, more than 3,000 season ticket seats had been pre-sold. “People had been calling, and they were waiting in lines. Hundreds came for the mid-afternoon scrimmage.”

Season tickets range from $132 up to $364 for an eight-game home season, which ends Aug. 21, when the Wranglers play The Tucson Sugar Skulls. Individual tickets start at $16. Group rates also are available and are an especially good deal for families, said Werking. “Kids enjoy meeting Whiskie, the colorful Western-dressed team mascot.” They also can join the “Kids Club,” and receive team t-shirts, miniature footballs, photos with the players, a pizza party and movie night.

Town leaders say they are thrilled to have a new occupant in the Toyota Center. For several months, the arena was void of professional teams. The Northern Arizona Suns, an NBA-G League team, had been sold by its owners, the Phoenix Suns, in June of last year.

“We are thrilled to have a new anchor tenant at the Findlay Toyota Center,” said Acting Town Manager Ryan Judy. “We look forward to their fast-paced, entertaining style of football, and to their tailgate parties and certainly, positive economic growth. Go get ‘em, Wranglers.”

“Having a professional sports team, the NAZ Wranglers, in the Findlay Toyota Center will create excitement,” said Prescott Valley Chamber of Commerce President and CEO Marnie Uhl. “It certainly will have big economic impact. The team will attract a large fan base not only locally but also from other communities throughout the state. Rivalries with the Arizona Rattlers from Phoenix and the Tucson Sugar Skulls are guaranteed to bring out-of-town guests. The downtown will be energized with people visiting local restaurants and using our hotels for overnight stays. The Wranglers are bringing a new spirit and sense of personal ownership into our hometown team.”

Those unfamiliar with professional Indoor Arena Football (IAF) will have a lot of learning to do. The rules and actual game are distinctly different. IAF teams have only 21 players and only eight men for each play on either offense or defense. Also, the field is less than half the size of a regular football field. In fact, it’s the same size as a hockey field – 26 yards wide and only 50, not 100, yards long, as is the case for a National Football League (NFL) field. Endzones are only eight yards deep and goalposts are closer together. Nets stop any kicks from going into the stands, so they bounce back onto the field where the ball remains “live.”

The next home game is scheduled for 3 p.m., June 5. For more information, go to NAZWrangers.com. QCBN