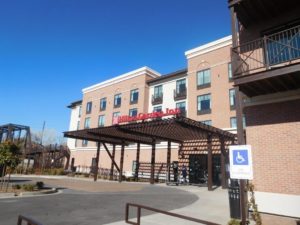 Despite diminished travel because of the pandemic and the slowing economy, the recently opened Hilton Garden Inn Prescott Downtown (HGI) has enjoyed considerable success in attracting guests.

Hotel developer Shane Shumway, of Shumway Hospitality, says the location is perfect to attract visitors to the core of the city.

Located at the west intersection of Montezuma Street and Sheldon Street, the 55-foot-tall, three-story, 101-room hotel is only a couple of blocks from the iconic Courthouse Plaza and Whiskey Row attractions of historic pioneer Prescott.

Moreover, just behind it is Granite Creek, a small stream with nearby walking trails that go through the center of Prescott and curl into the verdant Granite Creek Park. Underway is a $1.9 million creek improvement project to make it even more appealing and accessible.

The restaurant at the hotel, Triple Creek and Spirits, is a nod to Granite Creek and two other small streams – Miller and Butte Creek— that tie into it.

Shumway, whose primary office is in Pinetop-Lakeside, also has a successful hotel property in Flagstaff.

The Hilton Garden Inn had high occupancy rates during the holiday season and was largely sold out. After that, occupancy dropped, but is now beginning to increase again. Most guests are from the U.S., though a few international guests have checked in.

Several months ago, city economic analysts projected the fiscal impact of the HGI would be at least $18 million a year.

Hotel personnel emphasized that the sanitizing, disinfecting and intense cleaning is done routinely in all areas. Dining and lounge area seating is limited to 50% capacity because of public health concerns with COVID-19. All employees are wearing facemasks. Guests are asked to follow Centers for Disease Control and Prevention (CDC) guidelines.

Barbe noted that food served will not be typical of many Hilton franchise hotels. Instead, meals will have a hometown and often Southwest flare. “We’re trying to keep the Prescott flavor,” he said.

The same is true of the lounge, named “Sam’s” after the Sam Hill Warehouse just behind the hotel that is being renovated into a major event center. Drinks served in the lounge will have names that tie to local culture.

The Sam Hill Warehouse renovation is expected to be complete by late spring. The historic warehouse belonged to Prescott College until Shumway bought it and made it part of the multi-acre hotel development. The event center will connect to the more than 100-year-old restored railway trestle across Granite Creek.

Front Desk Manager Sue Mourlot says guests enjoy the location and amenities. “They especially like the free self-parking and access to the fitness center and the business center.”

A grand opening celebration is being planned when the Sam Hill Warehouse remodel is completed. QCBN