You are here: Home / Business / Out of Africa Celebrates Birthday Tigers 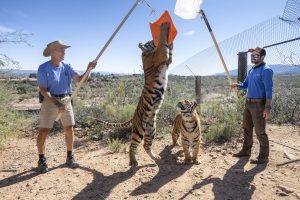 Equinox and Exodus are a year old.

They come when their names are called, love to play and go on walks, and at over 150 pounds each, drink from a baby bottle.

Meet Equinox and Exodus, Out of Africa’s Bengal tigers who are celebrating their first birthday.

As playful as they are, they may seem like big domesticated cats, but touching them is strictly off limits to visitors.

“I get to hug my tigers every day,” said Out of Africa Wildlife Park carnivore manager and biologist Addam Krauch. “They are growing so fast and realistically could be pushing 170 pounds right now, which is typical for our male tigers here at the park.”

Overseeing the Out of Africa spotted hyenas, black bears, mountain lions, black leopards and wolves, Krauch has been at Out of Africa Wildlife Park for four years and has helped raise Exodus and Equinox since they were babies.

“They arrived here when they were just two months old but this is my favorite time with them because their personality really starts to come out.  When they were itty-bitty babies it was around-the-clock care, as we had to make sure everything was all right with them, much like a human baby.  They are now starting to become more independent and getting more coordinated.”

Procured from a wildlife park in Upstate New York, Out of Africa Wildlife Park Co-founder Dean Harrison says it’s a privilege to raise tiger cubs. “You get to know them in a different light and after a while, they become your friends. But they are still cats at the end of the day, so we’re constantly reading them, watching their behaviors and making sure everything is OK and they want us to be with them. So far, these two have been phenomenal tigers and great additions here.”

When the tigers made a purring sound called chuffing, Harrison explained this is the tigers’ way of saying, “I’m happy about meeting you and I’m having fun. I want to play with you.”

“These guys are remarkable in our Tiger Splash shows. We take them down into the pool, we swim with them and we let them tackle us,” said Krauch.

“We provide the tigers a life that addresses all their needs, so they can have a full life. We let them play and hunt us because that allows them to be tigers and hunting is playing for them. They do take us down from time to time, but without harm, because if they are playing with friends, they do not want to hurt their friends,” said Harrison. “Now, if they don’t have a relationship with someone, it’s a different story.”

With a total of 200 acres, Out of Africa Wildlife Park is located on the outskirts of Camp Verde. Harrison said that every animal at the park knows his or her name. “Every animal has their own habitat with lots of room. Some cats go on the overpass from one end to another for new smells and new adventures.”

Harrison and his wife, Prayeri, visited Africa in the ‘90s and became enamored with the animals; so much so, they did some tours with friends there. On one trip, they stayed for one month.

“We moved to Ft. McDowell in 1988 and started Out of Africa on a shoestring. We ran out of room and moved to Camp Verde and opened in 2005. We started with 100 acres and again needed more room so we purchased another 100 acres so the animals have plenty of space and a wonderful view. We just love it here and the climate is perfect,” said Prayeri.

With their home in the middle of the park, the Harrisons enjoy a bird’s eye view from their veranda. “It’s like being in Africa,” said Prayeri. “We can spot the zebras in the morning and see the rhino playing with his toys.”

Along with Equinox and Exodus, Out of Africa Wildlife Park is home to many African animals, including Bart, a two-toed sloth and Enoch, a black leopard.

“Not only is Out of Africa Wildlife Park one of our most fun businesses in Camp Verde, it is also the first major visitor attraction to make a significant investment here,” said Town of Camp Verde Economic Development Director Steve Ayers. “For that reason alone, we will always owe a debt of gratitude to Dean and Prayeri for choosing Camp Verde as their forever home. Happy Birthday to Equinox and Exodus!” QCBN