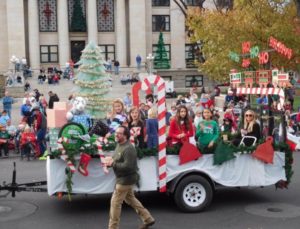 Due to ongoing concerns about rapidly increasing COVID-19 numbers, the City, the Prescott Chamber, Prescott Downtown Partnership, and Acker Night Committee jointly decided to cancel their events, including the Holiday Light Parade and Bonfire Festival; The Christmas Parade, and Acker Night.   The Courthouse Lighting will be held “virtually”, with online video of the traditional ceremony.   The Whiskey Row Boot Drop will delay their decision until December 21.

The decision by the organizations was made in consultation with Yavapai County Board of Supervisors Chairman Craig Brown, the Yavapai County Community Health Services department, Prescott Mayor Greg Mengarelli, and the Prescott Police Department.   Due to rapidly increasing numbers, there was concern about the availability and safety of public safety personnel who would be called to support these large events.

“While I am deeply disappointed, this is a decision we had to make, in the interest of public health,” said Mayor Greg Mengarelli.  “We at the City are concerned about the availability of police officers, and appropriate allocation of these resources at a time when positive cases are increasing.”

The Courthouse Lighting will proceed virtually on December 5 at 6 p.m.  For details about the virtual event, go to Prescott.org.

“Although the traditional events will not take place this year, Arizona’s Christmas City spirit will continue on,” said Prescott Chamber President and CEO Sheri Heiney.  “You can enjoy the historic Yavapai County Courthouse in all its festive glory.  The lights are on from December 5th through January 17th.”

“We are sorry that these important events have been cancelled,” said Scott Currey, with the Acker Night Committee.  “However, we stand with the other event organizers and the City to help keep Prescott safe over the holidays.”  Refer to www.ackernight.com to get the latest info about a 2020 Christmas City Special, produced by Raven Sound Studio, to be aired on Acker Night, December 1.

As of this press release, the 10th Annual Whiskey Row New Year’s Eve Boot Drop is still slated to take place on December 31, 2020 on Montezuma Street. Organizers will be working with the City and County to make a final decision on holding the event as it approaches. “We’re discussing having some form of the Boot Drop, if not the full event. People are just really ready to say goodbye to 2020 and we hope we can give them the opportunity to celebrate in some way. We want it to be safe though and we’ll keep people posted on our social media outlets as to any changes,” stated Matt Brassard of M & M Entertainment, the event planner.