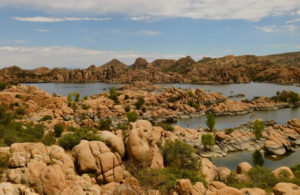 The pathway is open for future deliberations and discussions about the development of 850 homes and 200 resort units in land owned by Arizona Eco Development (AED) in the iconic Granite Dells area.

The property is located on the northeast side of Highway 89 as it goes toward the Prescott Regional Airport (PRC).

A unanimous vote by the Prescott City Council approved a letter of intent with AED during a council meeting on June 9. City Attorney Jon Paladini pointed out the letter of intent is a “non-binding agreement but that it was necessary so that further discussion could occur to refine precise details involved in the project.”

In a statement to the Quad Cities Business News, Prescott Mayor Greg Mengarelli said, “I was pleased with the contents of the letter of intent. I have full faith and confidence that the submittal and public review process will move forward in a timely and transparent fashion.”

Reaching the signing of a letter of intent has taken more than two years of sometimes intense negotiation among three main parties – The City of Prescott; AED, whose CEO is Jason Gisi, and the Save the Dells advocacy group.

Specifically, the city will receive 475 acres that will be preserved as “open space” near the iconic Point of Rocks landmark. That open space also assures preservation and protection of the popular Peavine and Iron King trails.

The City will have 270 acres of land near the PRC, for future airport expansion and economic development. Also, another 131 acres in the airport area will be acquired. Mayor Pro Tem Billie Orr wrote, “Using a 90% FAA grant, the additional 131 acres adjacent to the runway will be purchased by the city from AED.”

In exchange for the 475 acres of private land from AED (475 in the Granite Dells area and 270 near the airport), the city will provide AED with 753 acre-feet of water to serve the company’s Granite Dells residential and commercial developments. At the same time, AED will relinquish its water rights to 375-plus acre-feet of Watson Lake, southwest of the Point of Rocks in the Granite Dells. That water will be used for recharge and recreation.

Gisi has indicated that AED plans to develop 850 home lots and a 200-room resort complex near the popular Peavine Trail.

All the AED land will have access to potable water provided by the City of Prescott Water Resource Management Department. Properties will be connected to the city-maintained sanitary and sewer system. City officials note that residences and commercial businesses in the development will not be on wells or septic systems. Approximately 90% of the water from such properties will be recharged back into the city system.

AED has agreed to pay the costs for infrastructure, impact fees and surcharges required for maintenance of the water and sewer systems. Only one road will cross over the Peavine Trail instead of the initially proposed five crossovers.

Prescott officials emphasize that all properties must adhere to city standards and regulations, including having xeriscaped lots, water-tolerant plants and foliage, and high efficiency water fixtures and appliances.

City officials said the letter of approval was just the first step in what is likely to be a long review process toward a formal binding agreement. Currently, a 60-day comment period is in place.

“We’re not there yet, but we can see the finish line from here,” said Mengarelli. QCBN