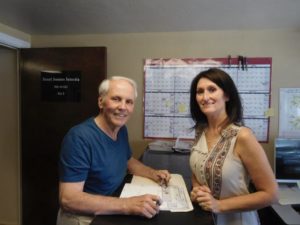 Even with cancelations and postponements of many activities in the greater community, the Prescott Downtown Partnership (PDP) has managed to support and organize several events around the popular Courthouse Plaza.

Much is the result of the determination of the new executive director, MJ Smith. Smith assumed that role in early April after longtime resident Kendall Jaspers retired from the position. Smith praised Jaspers for his passion for Prescott and all he had achieved and initiated during his almost 10 years as leader of the PDP. Jaspers earlier had owned and operated Kendall’s Famous Burgers and Ice Cream, having founded it in 1987 directly across the street from the Courthouse.

Smith brings a wealth of professional marketing and promotional experience to the PDP. She came to Prescott from the Laughlin Tourism Commission, a major non-profit organization that served the gaming and hospitality industry in Clark County, Nevada. She was there 11 years.

Asked why she and her husband, Paul Terry, a chef, and their daughter moved to Prescott, Smith responded, “A PDP board member asked me that same question. My budget with the LTC was significantly larger, and we had year-round activities. But, when I saw the position posting for the PDP, I couldn’t believe my eyes. We’ve been familiar with Prescott for years.  We’ve vacationed in the Quad Cities area many times. We fell in love with the climate, environment and most of all, the friendly hometown community atmosphere.”

But, there’s a bigger reason, MJ explained. “Paul and I chose Prescott because this is where we want to raise our daughter, now 6 years old. This is the kind of lifestyle and childhood experience we want Aoibhinn [pronounced “Aven”] – and that rhymes with raven – to have as a kid. [Her] name is Irish in origin. Her middle name is Isle.”

Smith’s connection to Ireland goes back to when she finished her bachelor’s degree in journalism at the University of Arizona, in her hometown of Tucson. She accepted a correspondent’s job with the Associated Press in Cork, Ireland, the country’s second largest city.  She was there two years.

When Smith arrived, right away she became involved in meeting challenges created by the pandemic. “Balancing public health and economic health is making us approach things differently. We have had to adapt to a new way of doing business. For many of our 80-plus PDP members, that may mean limiting occupancy and accepting high cost adaptations in order to reopen. We’ve met with Arizona and Yavapai County Health officials, City of Prescott representatives, chamber of commerce members and discussed the most responsible way to handle events.”

During the early July week of Prescott Frontier Days and the World’s Oldest Rodeo, despite cancelation of the parades and dances, Smith and her colleagues worked an 80-hour week. “We wanted to be certain during all the events, including the Fine Arts and Crafts Show around the Courthouse Plaza, that sanitation and cleaning protocols were being observed. We had hand-wash stations and signage everywhere to remind people to be responsible and to respect their fellow attendees.”

Smith is emphatic in her belief about the value of a unified voice such as the PDP. “Small businesses by themselves may not always be the loudest voice in the room, but when they band together and unite in a message, they can effect real change. Tourism is a powerful economic driver and economic tool to attract new business. Strong local support, too, has been a major factor in keeping businesses open.

She says research shows that people associate a higher quality of life with a destination they enjoy during a vacation. “If we in Prescott position ourselves as a quality vacation destination, we’re positioned for strong economic development down the road.”

She said the PDP is already working ahead for events such as the popular Courthouse Lighting, which attracts thousands of people to “Arizona’s Christmas City.”

What quality do you most admire in colleagues and associates?

“Follow-through. Over the years, I’ve worked with people who paint incredible pictures with words but never create anything tangible. I much prefer those who tackle their objectives head-on.”

Who gave you the best advice?

“I love any excuse for wonder and whimsy. St. Patrick’s Day is special at our house. A mischievous leprechaun named Diarmuid McRonnan visits and makes a mess of things, turning everything green. But Halloween also is a big one. I love decorating for the change of seasons.”

“Living with a chef has its perks. I love Navajo tacos, fresh seafood, real Mexican food and dessert.”

Where do you go to get away?

“I’m drawn to the ocean. Sand on my feet, salt water in the air, listening to waves as I fall asleep. I am a true thalassophile.” QCBN