You are here: Home / Business / Prescott Junction has New Owner 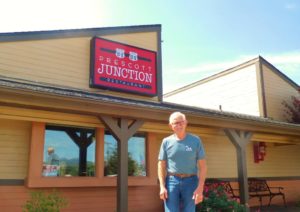 The historic Prescott Junction Restaurant, one of the first businesses motorists encounter as they approach the downtown area, has a new owner as of mid-November.

Jim Cabral, who owns and operates five other eateries and catering services in the Quad Cities, bought the restaurant from Don and Nancy Burton, who had owned and operated Prescott Junction for more than a quarter of a century. Cabral has been in the Prescott area for 35 years, after having come here from his home state of Rhode Island.

Cabral says nothing significant will change at the popular restaurant located near where highways 69 and 89 merge on the east side of Prescott. The menu will remain essentially the same. Cabral hopes the staff, some of whom have been employed at the restaurant for 20 years, will remain as well.

“We’ll keep the same American-style menu that has been so successful in attracting returning and new customers,” he said.

Considered one of the best locations in town at the gateway to Prescott, the restaurant has abundant free parking and positive reviews. TripAdvisor calls it “one of the top 20 of the more than 150 restaurants and cafes in the greater Prescott area.”

In July, Cabral was named “Business Leader of the Year” by the Prescott Valley Chamber of Commerce during its annual awards event.

Former owners Don and Nancy Burton say they now plan to retire and spend time with family, especially their grandchildren and great-grandchildren. They also plan to travel.

“We’re proud of all we’ve achieved, but it’s time to try something else,” Burton said.  “What we’ll miss is seeing the many regulars. Some have been coming ever since we bought the business.”

Married for 47 years, the Burtons have been involved in the restaurant business for most of their adult lives. Prior to moving to Prescott, Burton had been a vice president with the national JB’s Restaurant chain, which involved his traveling the country to evaluate the company’s four operating regions.

That led him to find the restaurant in Prescott, labeled JB’s. The name changed to Prescott Junction in 2007-2008, when the Burtons decided they wanted to shift the JB’s menu emphasis to something that had more appeal to local tastes.

One thing that did not change was the “Wall of Fame” of autographed photographs of celebrities who had dined at the restaurant.

The Burtons are happy they and the Prescott Junction, located at 1121 E. Sheldon Street, have had a role in the city’s history. QCBN