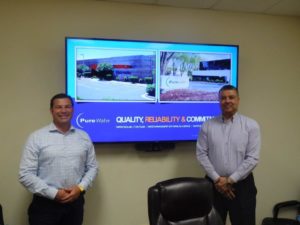 Pure Wafer’s silicon wafers are in pure demand, as they provide a base for microchips essential for modern tools and appliances.

Tiny microchips, brains for almost everything you own – smartphones, computers, electric toothbrushes, refrigerators, automobiles – are the lifeblood of our society. And they are currently in high demand because of a global shortage.

Chances are you think most of those chips come from foreign manufacturers, and that is partially true. But a bigger truth, one that many residents in the Quad Cities area may not realize, is this: The largest U.S.-based supplier of prime grade silicon wafers, wafer reclaim and other specialty products in the $400 billion semiconductor industry is Pure Wafer, with its home plant in Prescott.

Originally founded in 1998, and then operated by Rockwood Exall, the Prescott plant was acquired by Pure Wafer in 2007. It now is part of Pure Wafer Inc., with another fabrication plant in San Jose, California.

Collectively, the two facilities make up what is considered the largest microchip reclaimer, especially of 300 mm reclaim chips, in the United States. The Prescott plant is considered the most advanced reclaimer in the nation, according to S. Mark Borowicz, Pure Wafer president and CEO.

In an exclusive interview with Quad Cities Business News, Borowicz and Ardy Sidhwa, Pure Wafer vice president of operations at the Prescott plant, explained that Pure Wafer reclaims 200,000 wafers a month of all sizes. Pure Wafer has more than 1,600 customers, some national, some international and, of course, defense industries and government agencies. At both the Prescott and San Jose facilities, Pure Wafer personnel develop and supply prime grade silicon wafers, wafer reclaim, thin film deposition solutions, wafer management and wafer management software, as well as service and parts cleaning for the global semiconductor manufacturing industry.

Both men, each with a doctorate in engineering and related computer science disciplines, acknowledged that most in the general public have no idea how microchips are created and what stringent and sanitary manufacturing processes must be maintained to keep chips from being contaminated.

“Honestly, our manufacturing facilities are far more sterile than you’ll find in most hospitals,” said Borowicz. “Our air is cleaner, our water absolutely purified and our floor and wall surface sterile. What’s more, we announced this past January that we plan to be 100% clean-energy-powered by 2050. In fact, our Prescott plant is already 50% clean energy powered. It is on track to be 65% clean energy – carbon-free electricity – within the next nine years.”

Arizona Public Service (APS) currently supplies energy to power the rest of the plant until its conversion is complete.

“We remain committed to clean-energy programs and production processes that provide a better pathway to a cleaner manufacturing environment,” he added. “I am pleased to report that our customers, employees and stockholders all embrace these efforts.”

The 125 or so full-time workers at the Prescott plant keep Pure Water operating 24 hours a day, seven days a week, except for two winter holidays. “We’re always looking for additional qualified workers, too. We’re expanding. We have a need for labor right now, in fact,” Sidhwa said.

The company offers both short- and long-term insurance, disability plans, paid vacations, medical insurance, on-the-job training and advancement opportunities, Borowicz said. “This is one of the best places where we could be located.”

Security is a Priority

The 44,000-square-foot building that houses Pure Wafer is, as might be expected, highly secure.  Located at 2575 Melville Road, east of the Prescott Regional Airport (PRC), no one enters the building without being thoroughly monitored. Employees wear elaborate protective gear – “bunny suits,” Sidhwa calls them. Personal equipment includes goggles, masks, hairnets, gloves, booties and, at times, a hood or jumpsuit.

The company has spotless rooms where equipment worth millions goes through more than 700 necessary steps in three months to produce wafers, which serve as the platform to hold microchips. The most common wafers are known as 300cc wafers (though they can drop down in size to about three inches in diameter). The almost 12-inch diameter shiny black silicon discs are about the size of a pizza. They move through the factory in and out of sophisticated equipment that chemically coats, washes, polishes, etches and transforms the wafers into tiny brains that govern the items that are so much a part of our everyday lives, including planes, ships and trains.

Borowicz says Pure Wafer will continue to expand. Because the pandemic disrupted the worldwide supply chain for microchips, the demand for Pure Wafer products has intensified. In addition, a manufacturing market analysis had prompted Pure Wafer to move more strongly in the market reclaim market.

“We are the only U.S.-based reclaim [company] with a particle guarantee for our products,” said Sidhwa.

Although the world’s leading manufacturing countries are Taiwan, Korea, Japan and China, the U.S. Senate recently approved spending $250 million for science research and to help subsidize semiconductor manufacturing in the country.

“We are well positioned to address reclaim growth as the No. 1 reclaimer in the U.S.,” Borowicz said. “Our wafer reclaim market also is growing significantly worldwide.”

Stewart Chalmers, an international semiconductor consultant, praised Pure Wafer for its aggressive stance. “Arizona is playing a big role, as is evidenced by the number of semiconductor companies operating here – Intel expansion, Samsung and, of course, Pure Wafer in Prescott,” he told QCBN. All are positioned to support forthcoming growth.” QCBN