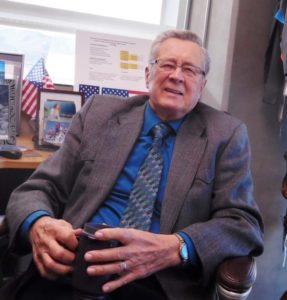 When 13-year-old Ashlyn asked her grandfather what a mayor does, Harvey Skoog gave his answer serious thought. At the time, Skoog was midway through his third term as mayor of the Town of Prescott Valley.

“Even though I had been mayor for several years, I decided I needed to be able to explain clearly to an inexperienced teenager what a mayor does. In doing that, it made me clarify for myself what the role involved,” Skoog explained.

Skoog, now 79-years-old, said, “The primary concern is to serve the best interests of the community in all decisions. Being mayor is an office that must serve the public.”

A resident of Arizona since 1974 and Prescott Valley since 1982, Skoog is emphatic in his view. “A mayor only holds the office; he does not own it. It is a multifaceted office – formal, informal and ceremonial. Many duties have no written descriptions. But foremost, is the obligation to draw upon the talents of council members, staff, commissions and volunteers to serve the best interests of the community. Concerns of citizens must be respected and appreciated.”

The Minnesota native has announced he will retire at the end of his fifth term in December.

Always well-dressed, Skoog, a farm kid from a small rural Minnesota community, attended a one-room schoolhouse. Later, he attended the University of Minnesota and Minnesota School of Business and earned credentials in financial management and bookkeeping-accounting. He began his management career with a major Minnesota food company but took advantage of a career opportunity to work with an international firm, National Cash Register, for several years.

But warmer weather in Arizona appealed to him. In 1974, he took the job of assistant to the comptroller for the Associated Grocers chain in Phoenix. In 1977, Skoog decided to become his own boss, so he moved to Prescott Valley.

“At that time, PV had only a population of 3,000 and it hadn’t yet incorporated. I was lucky and became a tax and business accountant-consultant. I founded and then sold three different practices,” he said.

Prescott Valley incorporated in 1978 and has experienced explosive growth to the point it is now the largest community in Yavapai County, with a population approaching 46,000.

“Growth isn’t stopping,” Skoog said. “We’re building about 42 houses a month – and they are affordable.”

Skoog says he became involved in civic government in the early 1990s and hasn’t stopped since, despite health issues. “I had cancer in 1999, but it’s gone now. I also had bypass surgery. I have a pacemaker. And most people don’t know it, but I’ve had seven heart attacks.”

Two people who have worked closely with Skoog for many years, Larry Tarkowski, PV town manager, and Lea Duke, PV executive assistant, agree that Skoog always has a positive outlook.

“Harvey has the distinction of having been a councilmember and mayor for the majority of the 40 years our town has existed. That gave him enormous opportunity to have positive impact on its direction. All of us who work with him are grateful he has served as an example for all the employees,” said Tarkowski.

Tarkowski complimented Skoog for his “…light touch on the tiller of public policy while at the same time he ensured transparency and a strong customer service ethic for all aspects of town government. Respect, trust and a sense of care for employees and citizens are hallmarks of Harvey’s tenure.”

Duke echoes Tarkowski. She has worked directly with Skoog for 13 years. “He loves this community. He dedicates himself to making it a positive, beautiful place for families to make a home. He keeps his office open so that citizens can come and share their concerns. They often tell me when they leave that they are impressed by what a gentleman Mayor Skoog is.”

Duke especially cited Skoog’s efforts to know personally each of the more than 230 town employees. “He appreciates what each employee contributes. He consciously reviews what each employee in each department has done, and he knows almost everyone by first name.”

Duke smiles when acknowledging Skoog’s pending retirement. “We’re going to miss him, but he and Edna truly do want to spend more time with their kids and grandkids. He deserves that opportunity.”

Where will the road take you in retirement?

“We’ll probably sleep a bit later and have more personal time. We’ve no big plans for travel other than perhaps visiting our children and grandchildren, who are spread all over the country. We have talked about a cruise.”

What’s the best advice you ever received?

“I can’t remember who told me this, but it was years ago – and it stuck. I was told to hire the best people I could identify, tell them what was expected and then to get out of the way and let them do their jobs. Don’t micromanage.”

What characteristic do you most admire in colleagues and associates?

“Ambition, honesty and integrity – all very important. And being approachable, not distant.”

“We like walking and hiking. We enjoy good company, good friends. We don’t have a TV, and I’ve never, ever seen a movie.”

“We really enjoy going to local restaurants for breakfast, where we have a traditional bacon and eggs meal. And honest, we enjoy In-N-Out Burgers – a lot.” QCBN