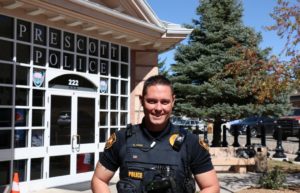 Prescott Police Officer Kyle Audis loves the Quad Cities area because it is super friendly for military veterans. “They say vets are only as strong as the people standing behind them,” said Audis, who got a close-up view of that support after being injured in Iraq.

While working in Baghdad as an Army medic in 2006, Audis was injured when a car bomb detonated, killing nine people and injuring Audis and 35 others. Despite his many injuries, Audis helped his fellow soldiers until he passed out from blood loss.

Residents of his hometown community, Chino Valley, did all they could for Audis’ wife, Heather, and young son, Zack.

After several surgeries, Audis returned home on leave. People from throughout the Quad Cities surprised him with a parade and town meeting, honoring his service. Audis left to complete his enlistment with an even stronger belief that the greater Prescott region was the best possible place to live and raise a family.

The area is more than just friendly for vets, it is home to the Northern Arizona Veterans Affairs Health Care System, which serves about 26,000 people in the northern half of the state. Prescott has the most services for veterans, including an emergency department and inpatient medical services. Additionally, the NAVAHCS oversees seven outpatient and outreach clinics from Lake Havasu City to Kayenta, on the Navajo Reservation.

Carole Benedict is executive director of the U.S. VETS Prescott office. “As long as there is a homeless veteran out on our streets, our mission is not complete,” Benedict said. Her agency tackles homelessness by focusing on employment services, housing support, counseling and other services for veterans.

The level of veteran support was part of what attracted Bill Beechel to move to the area in 2014. Quad Cities residents were among the first to honor Beechel for his service to the country following his time in the U.S. Navy during the Vietnam War.

“After first moving here, I bought tickets to a War concert, and they gave us front-row seats and recognized me for my service,” Beechel said. He received pins from the VA hospital and an ongoing appreciation from the local business community, support he had not previously felt after serving in Vietnam.

On a recent fall afternoon, Beechel was waiting for a haircut at John Hancock Barbershop on E. Gurley Street, where vets enjoy 20 percent off.

Owner Grant Quezada, an Army veteran and member of the Arizona Army National Guard, participated in last month’s Hope Fest, a Christian festival with more than 100 organizations serving veterans, the homeless, and others in need. Quezada and his staff offered free haircuts all day.

“I do it because I served and I want to honor other people who make this country run,” said Quezada, whose discounts also apply to police officers and firefighters. “A huge part of what I’m trying to do as a Prescott business owner is to give back on all levels.”

The John Hancock Barbershop business model is working; the shop is expanding and business is robust.

Quezada regularly hears from others who have served that the Prescott area is one of the most veteran friendly communities out there.

Each of the veterans interviewed for this article commented favorably on the Quad Cities business communities, where establishments support veterans by offering discounts and respect.

Even the mayor of Prescott is a veteran. Harry B. Oberg is retired from the U.S. Army and said there are many reasons the region is a great place for veterans. “Aside from the VA Hospital and numerous active veterans’ groups and service organizations, our mile-high, year-round climate, outdoor amenities, trails, lakes and National Forest make Prescott a great place to live.”

Kyle Audis certainly agrees. His son, Zack, is now 12, and his daughter, Ally, is seven. Since nearly losing his foot and enduring many surgeries following the car bombing in Iraq, Audis beat the recovery odds and was hired by the Prescott Police Department.

“This is where I belong because I can give back to the people that were there for me during some of my darkest times; I want to be there for them through theirs,” Audis said.
And when he responds to emergency calls and sees a vet who may have broken the law, he lets them know things can improve, in part because of the many veterans programs in the Quad Cities. Then, Audis thanks them for their service. QCBN