You are here: Home / Business / Raptor Ranch Comes to Bedrock 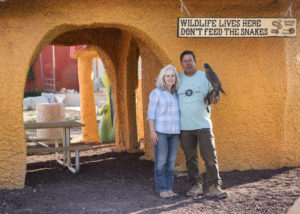 Having a yabba-dabba-doo time is exactly what Troy and Debbie Morris and Ronald and Angela Brown have in mind for their new but long-awaited acquisition of Bedrock City in Valle, named after “The Flintstones,” the animated cartoon sitcom of the 1960s.

Located off State Route 64 and U.S. 180, about 33 miles south of the Grand Canyon, the 30-acre parcel now houses their dream, Raptor Ranch, which will feature birds of prey flight demonstrations in company with stone-age characters like Fred and Wilma, and their friends, the Rubbles.

“We want to educate and display the amazing roles of birds of prey and how they act and hunt to maintain their lives in the wild,” said Brown. “Visitors will be able to watch and be a part of this natural experience, which for me is almost mystical to watch the birds fly around and come back.”

With a soft opening of July 4, the Birds of Prey shows are expected to be held daily at their outdoor theater and will feature Harris’s hawks, Peregrine falcons, Barbary falcons, Aplomado falcons, ferruginous hawks and eagle owls. “We expect an Andean condor soon,” said Morris.

“Our original plans were to fade the Flintstone theme out, since we don’t have licensing for Flintstone and can’t sell intellectual items,” said Morris. “But people have such an affection to it and there’s so much interest. We’re now keeping it and in the future will be expanding with a children’s playground that includes rock climbing walls and other fun activities.” He added that there would still be ample room to expand their aviaries on the north side of Raptor Ranch.

Maintaining the basic Bedrock infrastructure, reconstruction of a mini-mart, grocery store and restaurant with in-dining service will be housed in the main building, which is also the entryway to the ranch.

Morris’s niece, Brigett Reitan, who will be overseeing retail sales, moved to Valle from Washington San Juan Islands last June. “I wanted to support my uncle’s dream. I think as soon as this gets going, it’s going to be fabulous, and so far, I love it. It’s a big change from the San Juan Islands but he’s a good guy and deserves for his dream to come true.”

Menu items will feature American cuisine such as hamburgers, hot dogs and chicken wings, “but we hope to bring in more menu items,” said Reitan.

“Raptor Ranch represents the type of experiences and authentic visitation options that residents and tourists who visit this amazing landscape are looking for,” said Coconino County District 1 Supervisor Art Babbott. “Future generations have different sets of priorities and interests around how they recreate in public lands and outdoor spaces. This is a great example of how tourism experiences are evolving and serving our regional economic interests.”

Across the street from Raptor Ranch is the Grand Canyon Inn and Motel. General Manager Rebecca Kenyon says they are watching the construction step-by-step. “Their signs look fabulous. They are super-duper people and we’re hoping to work with them and post their show schedules.”

Avid falconers Brown and Morris are from Southern California and met more than 20 years ago. “When I showed Ron the business plan, he was ecstatic and jumped right into it as a partner. It’s been a rocky road, but we’re invested and in it for the long haul.”

“Raptor Ranch is poised to be one of the premier destinations on the road to the Grand Canyon,” said Brown. “The high-flying action and close-up experiences with the different amazing birds of prey and how they act in the wild will be top of vacation lists for visitors.”

Included are camping facilities with RV and trailer hook ups, a barbecue/picnic area, laundromat and WiFi. Glamping may be offered in the future. Campers also may be treated to an early-morning bird show to view how the birds are trained.

Bedrock City was built in 1972 and has been a roadside attraction for travelers as they pass the 20-foot Fred Flintstone sign. Raptor Ranch honors Flintstone alumni by featuring a photo contest on its website of guests’ visits. QCBN