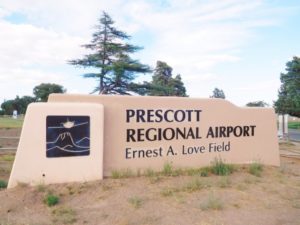 The contract to start the renovation and ground-clearing process prior to the construction of a new airport terminal has been approved. Demolition of some existing structures is scheduled to begin once approval is received from the Federal Aviation Administration, says Kristi Miller, airport management analyst for Prescott Regional Airport-Ernest A. Love Field.

Ironwood Construction (dba Catclaw Contractors) will demolish and remove hangars and shade structures inside the fence just north of the existing 1940s-era airport terminal. It is currently located at 6500 MacCurdy Lane in northeast Prescott just off Hwy 89. The Prescott City Council approved a $58,350 contract for that project.

The existing terminal will be replaced by a multi-million-dollar building and road system that has been in the planning stages for several months.

“With what promises to be a beautiful new 18,000-square-foot terminal, the future looks even brighter for the airport and the region,” said Prescott Mayor Greg Mengarelli.

Prescott Regional Airport Director Robin Sobotta and her team have worked with Fann Contracting, a local company, and Willmeng Construction, a Phoenix-based firm, to initiate construction.

The Fann and the Willmeng companies will collaborate in what they are calling a “vertical and horizontal construction process” with upward rising buildings and ground-level roads.

In addition to the new terminal, plans for some runway lengthening and expansion are under consideration to support airplane performance. Longer runways are needed to help aircraft deal with air density in summer heat. Hotter weather diminishes air density, thus making it necessary for aircraft to need long runways to gain lift.

Need for a new terminal became more apparent with record-breaking commercial air service to and from Prescott. As of Aug. 29, during the past year, the airport has seen an unprecedented passenger count of 53,614 passengers. This occurred after a year of service from United Express, operated by SkyWest Airlines.

Sobotta said the airline service provided by United Express/SkyWest Airlines has an average load factor of 77 percent. Currently, non-stop flights to and from Prescott are to Los Angeles or Denver.

She also said the airline had a non-cancellation rate – flights arriving and leaving on schedule – of 98.9%, an indicator of reliability for United Express.

She indicated the airline would be adding an additional 450 seats for holiday travel in the fall and additional spring flights are likely to be announced later this winter.

Estimated cost for the new terminal is close to $16.2 million. Sobotta said terminal design is 95 percent complete and should be finished in the next few weeks.

The new terminal is expected to be in operation in late 2020. QCBN