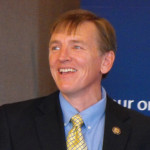 U.S. Congressman Paul Gosar, D.D.S (AZ-04) issued the following statement after the House of Representatives voted again to avoid a government shutdown, delay the Obamacare individual mandate, and promote fairness by repealing the Obamacare subsidy for Members of Congress and the President:

“The House has the power of the purse and we ought to use it wisely and positively – that starts with keeping government open, delaying Obamacare, and not allowing special exemptions for Congress or the President. House Republicans have now offered three funding bills to avoid a government shutdown and protect American families, while Democrats refuse to negotiate and insist on protecting Obamacare. The Senate Majority leader should follow the House’s lead and act to prevent a government shutdown.”