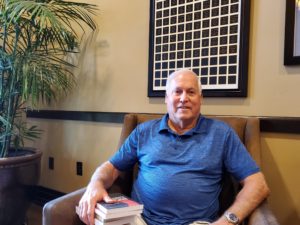 The division armed a succession of LA police chiefs with intelligence to peddle influence and intimidate opponents, Rothmiller said. Among about 70 detectives active during Rothmiller’s five-year tenure, he noted, not one arrest was made.

“Going back to the 1930s, the police chiefs were the most powerful people in Southern California,” he explained. “It was a very different time.”

New detectives were assigned to learning how the filing system worked. Never dreaming that he would one day be writing books about what he discovered, Rothmiller said he flipped through index cards linked to files about mobsters, actors and actresses, politicians and other icons.

From Detective to Writer

Now a New York Times bestselling author chasing down conspiracy theories, Rothmiller has published 34 books since 1992. Four of those volumes were co-authored and some were written under pen names.

His latest book, “Bombshell: The Night Bobby Kennedy Killed Marilyn Monroe,” incorporates Rothmiller’s handwritten notes, Monroe’s diary, and a 1982 interrogation of the late actor and Kennedy brother-in-law, Peter Lawford. “Bombshell” re-
creates the events of Aug. 4, 1962, at Monroe’s LA home, and has generated media buzz in Australia, England and Germany.

Rothmiller stumbled upon Monroe’s missing diary, the grail in Robert F. Kennedy’s (RFK) frantic search of Monroe’s home on the night she died. Lawford later told Rothmiller that he was at Monroe’s home while Kennedy rummaged for the incriminating volume. Monroe’s diary had not been logged in the OCID filing system, a fact that Rothmiller ascribes to it having been buried. Rothmiller handwrote the entries that interested him.

When Rothmiller interviewed Lawford 20 years after Monroe’s death, he says the actor was an alcoholic and a broken man. Nonetheless, the he said he is certain that the actor was sober and truthful about witnessing RFK mixing a special beverage for Monroe. Not realizing what the concoction was, Lawford allegedly joined RFK in urging the emotionally distressed Monroe to drink it.

The undercover experiences of Rothmiller in OCID and the cover-ups he alleges in his books are a far cry from his daily life in Prescott. He and his wife, Nancy, arrived 15 years ago following a stint in Colorado.

He is currently working on his first novel and his next compendium of conspiracies, including RFK’s assassination and the Black Dahlia murder. The fiction book is pure detective drama.

“My wife is reading it now,” he said. “I wrote it actually the way that detectives speak, not the TV stuff. It takes place in Hollywood. I worked there, so that’s where I come from in my writing.”

Rothmiller also has been digging into Hillary Clinton’s 340,000 emails. Despite his intense interest, Rothmiller says those email messages likely will be classified for the next 25 years.

“I enjoy the research more than anything else,” he said. “I dig in. A lot of times, it’s a deadend. My work is true crime, very graphic. There is no candy coating.”

Decoys, misinformation and other subterfuge were used by detectives and their sources to keep OCID’s intervention quiet, Rothmiller said. Often, there would be an official crime investigation and a parallel OCID case. The OCID analysis never saw the light of day.

“We were working under cover,” he explained. “In a lot of cases, the information [from sources] was so startling to you that it was seared/embedded into your memory.”

The backstory behind how he snagged the interview with Lawford and the actor’s concern that Rothmiller was a CIA agent provide interesting reading in “Bombshell.” Shortly after the Lawford interview, Rothmiller was ambushed and badly injured. Ultimately, the attack was traced to another case involving Central and South American gun running and drugs.

“I was in the hospital in the trauma center under an assumed name,” Rothmiller recalled, when intelligence personnel reported that the attacker had returned to Nicaragua and that Nancy also had been targeted. “[The criminals] wanted to send a message to everyone in law enforcement that if you got in their way, they would take out your whole family.”

Rothmiller’s first book was published about 10 years after he had left police work. Titled “LA Secret Police,” the book documented life inside OCID and quickly made the bestseller list. By that time, he had been a TV reporter and had his own ESPN series.

“I thrive on exposing things that the average person does not see,” Rothmiller said. “Intelligence gathering is a completely different world. There are things that people do not want you to see.  There is so much political corruption, but now they are more cautious and devious in the way they cover their tracks.”

It came from my mother: I am not sure how old I was, 8 or 9 that I recall, and about to play hardball at the park. I had never played before and I was nervous about it. She said, “Michael, you don’t know what you can accomplish unless you try.” I did well and pitched a no-hitter. Her words always stayed with me. What is the worst that can happen? You don’t know until you try.

For vacation, I like Alaska and I have been 20 to 30 times to Hawaii. When not a vacation situation, I like going places that are unusual and different. I am an archeological site steward for Arizona. I have spent plenty of time off the beaten path, hiking two-story cliff dwellings that look like the inhabitants walked away a couple of weeks ago, even though it was the year 1300. Doing the news (as a TV reporter/director), I spent two weeks in the Amazon swimming in clear tributary waters and enjoying the wildlife.

When I was in San Diego working at Sony and on the USO Board of Directors, I met a lot of military personnel being shipped off to Iraq and other places, not knowing if they would be coming back. I saw them with their spouses and children. The littlest children did not understand where Dad or Mom was going. Even in police work, you can quit anytime you want, but not as a soldier going on deployment to war. You can’t say, “I quit today.” I have to admire those people. In my book, “My Hero: Military Kids Write About Their Moms and Dads,” the kids wrote essays about why their parents are their heroes. I admire those kids, too, for how brave they were talking about their parents.

That goes back to what my Mom said. I am not afraid to try new things, not knowing if I am going to succeed or fail. If I succeed, wonderful. Maybe it’s an attitude toward life.

I assume I will still be writing right here. It keeps my mind active. Research and writing are like a treasure hunt for me. Most of the time, I find a gem to answer a question or open others’ eyes to something. QCBN