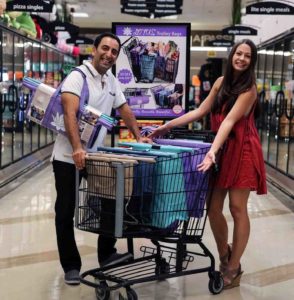 It was about more than just de-cluttering.

Their frustration with drawers, closets and shelves crammed with single-use plastic bags led a Southern California couple, Farzan Dehmoubed and Jennifer Duvall, to create a start-up business in April 2017: the Lotus Trolley Bag.

An innovative system of four color-coded bags that fold out like an accordion on the shopping cart allows consumers to easily sort and pack groceries in half the time.

And they have also added another item to production, the Lotus Produce Bags, to replace plastic in the produce section.

“Our business was born out of pure frustration, with reports that there will soon be more plastic than fish in our world’s oceans,” Duvall recalled. “I could go on with all the disheartening facts I’ve learned while entering this space. I knew plastic pollution was bad, but I really had no idea the extent, magnitude and damage until I entered into this business.”

“We were both happy when the plastic bag ban came into effect, but what we found was that with a lot of families, it didn’t reduce waste,” she said. “We were just accumulating thicker, more cumbersome plastic bags or cheap reusable bags that quickly grow mold and bacteria.”

Duvall, a former high school math teacher, and Dehmoubed, who had run a marketing company, began to research the scourge of plastic bags.

Their research revealed that the average American family uses 1,500 plastic bags per year for about 12 minutes each.

Working as a team, they experimented with hundreds of bags from all over the world before coming up with a design that met their needs.

Duvall and Dehmoubed, both 40, live and work in Carlsbad, a beach community near San Diego.

“We want to be an agent of positive change,” Dehmoubed said. “Showing consumers that one small change can result in massive impacts on plastic pollution. We also hope our story motivates others to take the plunge and start their own business. All you need is an idea or a problem to solve. If you have passion and drive, anything is possible. It’s the best decision you will ever make.”

The success of their startup has come as a pleasant surprise for the couple.

“We weren’t expecting the Lotus Trolley Bag endeavor to become a full-time job,” Duvall said. “We started the company as a small, part-time project. We expected our first shipment in 2017 to sell out in three months; we ran out of 5,000 sets in just two weeks!”

At the beginning of July in Prescott Valley, Lotus Trolley Bag products became available at the Safeway store on East Highway 69, just in time for national Plastic Free July, a growing movement as consumers become more aware of the impact that plastic is having on land and sea.

Since a merger in January 2015, Albertsons Companies LLC has owned Safeway.

“Our launch into Albertsons and Safeway will offer customers an easier and more organized solution to wasteful plastics,” Dehmoubed said. “Produce bags are usually ignored, but more retailers are seeing the value to the environment and their bottom line by investing in reusable, washable and eco-friendly produce bags.”

Each Lotus Trolley bag is made from 120gsm non-woven fabric, with reinforced handles and mesh bottoms.

The set of four bags, including the insulated bag, typically retail for $34.99, discounted to $29.99 in stores.

Lotus Trolley products are being sold on racks next to the checkout line, which show how the bags spread out in the cart and how they help pack and organize a shopper’s groceries.

Each bag also has a specific purpose – one is a cooler bag for frozen items and meats, another has wine and egg pockets to go along with canned goods, and the other two are for fruits and vegetables.

The Lotus Trolley Bag system weighs 2 pounds and can be carried in an over-the-shoulder bag reminiscent of a yoga mat bag, a concept thought up by Duvall, who is a yoga enthusiast.

“Neither of us has a design background, but we worked as a team to design both the bags and system,” said Dehmoubed, who was born in Iran, grew up in Canada and moved to California 10 years ago. “Jen definitely has an eye for style and fashion, which is an important component because we also want our customers to feel and look good with our bags. She created the color schemes and logo, which are critical to our branding.”

Duvall also came up with the “Lotus” part of the company name, because the bags unfold like a lotus blossom.

Products are manufactured in a family-operated factory in China.

“In our Carlsbad office, we have a staff of 12 employees and are growing rapidly,” Dehmoubed said. “We look to bring on investors soon to help us scale and expand rapidly to make the biggest impact.”

In a bit of happy synchronicity, both Dehmoubed and Duvall came to Southern California in search of sun and surf.

“Coincidentally, we both moved to San Diego separately within just months of each other,” he said. “We met and fell in love playing beach volleyball. We’ve been married for four years and are so grateful for being so close to our beautiful ocean.”

Dehmoubed, who is a surfer, said they are “both passionate about helping our oceans and eliminating plastic waste.”

They decided to donate to the non-profit 1% For the Planet, which they selected because of the organization’s global reach and partnerships with other causes that are in line with the couple’s mission and values. Through the non-profit’s umbrella, 1% of all Lotus Trolley Bag sales are currently distributed to Plastic Pollution Coalition and the Surfrider Foundation.

Response to Plastic Free July has been excellent, Dehmoubed observed in mid-July. “It’s a great time to bring awareness to this very important issue that affects every person on the planet. We’ve had several local TV stations (Denver and Boise) feature us as part of Plastic Free July story packages. It’s been very exciting, and we love being part of a movement for change.”

To come up with the Lotus Trolley Bag concept, the couple studied their own habits and those of other shoppers going through checkout lines.

Currently, Lotus Trolley and Produce Bags are in more than 2,500 stores across the county,

“We are in all 50 states,” Dehmoubed noted. “We are being distributed nationally by Albertsons, and Kroger will be distributing nationally in the coming months, along with several dozen smaller retail grocers. We are also expanding our reusable Lotus Produce Bags rapidly, and it’s been exciting to see the amazing response from our customers in store and online.”

Both products have become bestsellers on Amazon and an Amazon Choice product. The company is also expanding beyond the U.S., and has already launched in Canada, Mexico and Australia. QCBN