You are here: Home / Business / Rubs, Recipes Up In Smoke 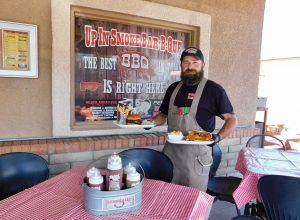 Andi and Jason Oubin have taken on the challenge of making great BBQ even better.

In May, the couple took over Eric Vernier’s longtime Big Daddy E’s Smokin’ BBQ in Chino Valley, and they have renamed it Up In Smoke BBQ.

The BBQ remains popular, as people stand in line, which sometime wraps around the small building, as they await this beloved food.

Andi said for the most part, Up In Smoke has kept the same recipes as Vernier’s because that’s what people like. However, she emphasizes that they want to walk their own path, so they use their own twist with the recipes.

Andi said they use Eric’s rub recipe, which is a salt savory rub, but they also use their own sweet rub. She said customers can order either and sometimes they order both for various plates.

Andi and Jason had their own restaurants in Ft. Mohave and Bullhead City.

“The most important thing is everything is homemade. The BBQ goes through the smoking process and we make the sides fresh every day,” she said.

“We’re taking on all orders that come our way,” said Andi.

For the July 4th weekend, Up In Smoke provided 750 meals for the Williamson Valley Fire Department, which was providing meals for people who work in a mine.

Andi and her husband have 25 years of experience in the restaurant business. They started with a small restaurant called The Shack in Bullhead City for two years before having a catering truck.

“My husband and brother have done BBQ competitions, so they have fun with it,” she said. “My husband is self-taught with BBQ. We want to find out what everybody likes.”

Andi said Jason also worked with multiple chefs over the years. And Jason trained with Vernier for a month before taking over the business.

“We listened to what he had to say. He was here for years and he knew what people liked, so we adopted those practices,” Andi said. “But we’ve been 100% accepted by the community. We just can’t do everything as he did it. We have to be our own.”

However, Andi said they don’t want to shock anybody by changing everything dramatically either.

“Our BBQ is popular because it’s all smoked. You can smell it before you eat it,” she said.

Andi emphasizes that it is a family restaurant. Many of the staff members have stayed on. Regulars likely know the servers by name. “We just all mesh together so well,” she said about the six employees and customers.

The most popular dish is the brisket and the tri-tip beef.

Andi said Jason does all the smoking of the BBQ to make sure the flavor is consistent. “He can work that grill like no other.” QCBN