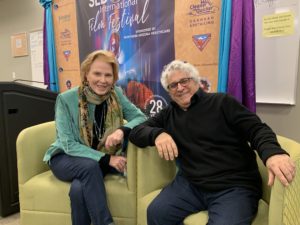 Mariette Hartley and Jerry Sroka spent a sunny late-February day in the red rock country holding hands, quipping back and forth in their ongoing quick-witted banter and being nervous. The two veteran actors, married since 2005, were about to see their film, “Our Almost Completely True Story,” debut before a live audience at the Sedona International Film Festival.

The movie is an almost completely true love story, and a really funny one, as evidenced by the laughter in the Sedona Performing Arts Center. It brings the couple together in a Los Angeles bird store, not the true part of the story but a bird store seemed to fit, they said, because it is owned by one of their friends, Lloyd Bremseth, an actor from the original Broadway play “Godspell,” who let them shoot there for free and also played himself in the film.

As full as a sack of birdseed, “Our Almost Completely True Story” is packed with charming laugh-out-loud parts written by Hartley and Sroka for their famous friends like Bernie Kopell (Dr. Adam Bricker from “The Love Boat”), Morgan Fairchild (Chandler’s mom on “Friends,” also a cast member of “Falcon Crest”) and Mindy Sterling (Dr. Evil’s assistant in the Austin Powers films).

Viewers need to be on their game to catch all the clever one-liners throughout the film and identify the many impersonations delivered by Sroka. Hint: Soupy Sales, Jack Benny, Jerry Lewis and Woody Allen are among the 63 personalities that Sroka can channel spontaneously.

The story also is a really real one with scary dinner dates (Peter MacNicol), illness and loss. The challenges of aging are gently and humorously in the spotlight as the friends in their 70s, 80s and 90s navigate life from the tennis court to the audition stage to the operating room.

“Most of my best friends are as old as I am,” said Hartley, 82. “We really wanted a scene that showed what happens to older people who are still talented, still going out for auditions for crying out loud, and how they’re treated. Well, we got it.”

The audition scene features Hollywood royalty: Hartley, Fairchild and Tess Harper (“Tender Mercies,” “Crimes of the Heart”), all playing themselves as working actresses, sitting in a reception area waiting to be called for their turn by a young studio assistant who mispronounces their names.

But mostly, “Our Almost Completely True Story,” directed by actor Don Scardino (also from the original “Godspell”), features enduring friendship, love, compassion and depth both on film and behind the scenes.

“It was amazing. Our friends knocked us out!” said Hartley, of the cast she and Sroka assembled. “We don’t know how much power we have, soul power. The idea of who you are and how you live attracts amazing people.”

Both Hartley and Sroka were childhood actors, starting at age 10. The two met at a Screen Actors Guild meeting following long marriages and painful divorces. In the film and in person, Hartley says the most important trait she was looking for in a relationship was a sense of humor. “I just don’t know how you can live without it. It’s always there with Jerry,” she says of Sroka. “And sometimes, I’m pretty funny.”

Fans know Hartley from roles such as Dr. Carolyn Fields in “The Incredible Hulk,” for which she received an Emmy, as Dr. Claire Morton in “Peyton Place” and from many other memorable roles in programs including “Gunsmoke,” “Bonanza,” “Star Trek” and “The Twilight Zone,” along with award-winning Polaroid commercials from the ‘80s with James Garner. She also is known for her work helping those who have a mental illness or who have survived a family member’s suicide.

The audience responded to the film with a standing ovation.

Sedona International Film Festival Executive Director Patrick Schweiss presented Hartley with the festival’s 2022 Lifetime Achievement Award. “In honor of your passion and dedication to cinema and your commitment to the art of filmmaking; in recognition of your outstanding career of bringing memorable characters to life on stage and screen; in appreciation of your tireless advocacy on mental health issues and the countless lives you have touched and saved, thank you for sharing your passion with us and for making a difference in the world!” he said.

Again, the audience responded with a standing ovation. QCBN

Hear more from Hartley and Sroka on Zonie Living with Bonnie Stevens at
StarWorldwideNetworks.com