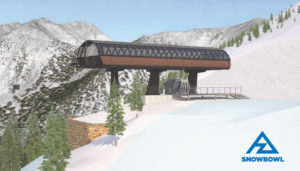 After a 12-month environmental assessment process, Coconino National Forest approved the replacement of Arizona Snowbowl’s Agassiz Chairlift. Approval couldn’t come at a better time. Amid challenges with the Agassiz Lift this season, Arizona Snowbowl announced the authorization and that they would begin construction on the new lift system. The new lift combines detachable chairs interspersed with gondolas. Similar state-of-the-art lift systems are in place in Austria, Italy and Sweden.

“Skiers will have the option of riding a six-person chair or an eight-passenger cabin,” explained J.R. Murray of Mountain Capital Partners, Snowbowl’s management company. “The winter uphill capacity [people per hour] will remain the same as the existing chairlift; however, the ride will be faster and more enjoyable.” The new Agassiz Express lift will transport guests 2,000 feet up the western slope of the San Francisco Peaks to 11,500 feet in just 7 minutes, nearly half the time as the current three-person chair.

“Right before we signed the decision on this, the Agassiz Chairlift went down. So this is good that we are replacing a longstanding infrastructure for the ski area,” said Mike Dechter, Coconino National Forest National Environmental Policy Act (NEPA) coordinator. “We felt, and Snowbowl felt, that it was about time that it was replaced.”

The Agassiz Lift was closed in mid-January because of mechanical failure inside the large bull wheel at the bottom drive terminal. “We tested bearings and gears and found small cracks in one large gear,” said Murray. “It took time to find a machine shop in the U.S. that could make the gear to exact specifications.”

Prior to its Jan. 18 closure, the Agassiz Lift installed in 1986, was intermittently shut throughout the season during high winds. Wind shutdowns may be lessened with the new combination lift as the manufacturers state on their website, “The exterior design of the gondola has been tested in a wind tunnel and creates an extremely low wind resistance, allowing for a safe and comfortable ride even at higher wind speeds.”

The new combination lift is manufactured by Leitner-Poma of America, Inc. in Grand Junction, Colorado. The company, which also built Snowbowl’s Grand Canyon Express lift, is a North American subsidiary of Poma S.A., a corporation headquartered in Voreppe, France and a sister company of Leitner AG, headquartered in Sterzing, Italy. Since 1989, Leitner-Poma of America has designed and manufactured all Leitner-Poma detachables in Grand Junction.

“In addition, it’s being replaced with current technologies that allow for better visitor experience, such as pulldown covers. You won’t have to worry about hail hitting you or heavy rains in the summer. The combination lift meets all ADA requirements. So it will make the lift more accessible,” Dechter revealed.

During the assessment period, Coconino National Forest received feedback from local Native American tribes. “Where we could, we did accommodate tribal concerns and comments,” Dechter said. Enhanced fencing to further limit access above the chairlift was part of the modifications adapted from tribal feedback.

Plans for a “farewell tour” for the iconic Agassiz Lift were developing as Rob Linde, general manager, announced the suspension of winter operations because of the coronavirus, on March 17, until further notice. “Although we’re located outside city limits and not required to follow the jurisdiction of the City of Flagstaff, we’ve voluntarily made the decision to suspend operations when the lifts close today,” he said in a press release. He explained that Arizona Snowbowl was following the guidance of Flagstaff Mayor Coral Evans and the mandate that went into effect at 8 p.m. that evening.

Murray said details for the send-off party including live music and chairlift auction would be announced by Arizona Snowbowl, one of the oldest continually operating ski areas in the country. Once Snowbowl replaces the Agassiz Lift, the original lift will be installed at another location.

“We are also working with the Coconino National Forest on a new Master Development Plan (MDP) that adds facilities to accommodate our existing skier capacity,” said Murray, chief planning officer at Mountain Capital Partners.  “The MDP includes year- round and more summer activities like mountain biking, alpine slide and ziplines.”

According to Murray, additional recreation opportunities would complement Snowbowl’s existing summer activities, respond to increasing demand for alpine recreation and diversifies year-round business opportunities. Snowbowl’s MDP will go through another NEPA process, which is expected to take more than a year.

According to LiftBlog.com, Arizona Snowbowl’s new Agassiz Express is one of 32 new lifts to be built in North America in 2020. Leitner-Poma and sister company Leitner will build 13 of those including the one at Arizona Snowbowl. The target for completion for installation of the new combination lift is fall 2020 for the 2020-21 ski season. QCBN