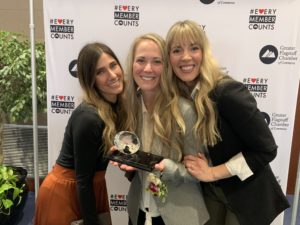 Nearly 10 years ago, Jessica Barker began teaching her friend’s 3-year-old twins how to spin, point their toes and curtsy. She expected, over time, they would be able to memorize a few steps and string them together to music. What she didn’t expect was the confidence and determination that began to appear on the little ballerinas’ faces.

And, that was her “A-ha moment.” Barker was hooked. She found herself wanting to invest more time in teaching dance. Soon, she had 10 little ladies leaping in her basement and her love for teaching was quickly pirouetting into a business. Thus, DancEvolution made its debut.

“I started to learn more about every aspect of the business – the costumes, the staging, the accounting, etc., because I wanted to see that growth in as many dancers as possible,” she said.

By 2018, DancEvolution had more girls in tutus than her home could handle. She moved them all to a commercial building and added more dance instructors. Currently, more than 200 girls are enrolled in her private dance school, whose mission is “to inspire love, excellence, accountability and positivity within our community.”

In her spare time, Barker volunteers at her church, where she mentors girls and young women ages 11 to 18. She also sets up weekly activities to help women set goals in their spiritual, intellectual, social and physical lives. Those activities include clothing and bedding drives for homeless shelters.

“There have been so many women who have helped me and encouraged me in my life,” she said. “I want to pay that forward.”

Last month, Barker’s tall, wispy frame shuddered in surprise as encouragement poured out from more than 600 business professionals and elected officials with a standing ovation in her honor during the Flagstaff ATHENA Awards.

And now, the international program that honors and celebrates women who demonstrate excellence in their profession, a commitment to their community, and a practice of inspiring or mentoring other women is coming to Prescott.

The prestigious ATHENA Leadership Award is making its debut in the Quad Cities this spring with the Premiere Prescott ATHENA Celebration and High Tea, 3-5 p.m., Sunday, April 19, at the Hasayampa Inn in Prescott.

Sponsored by Quad Cities Business News and Prescott Woman Magazine, local businesswomen will be recognized for their achievements and contributions as they serve as role models who bolster other women to pursue their leadership potential.

“The Prescott ATHENA celebration will be an afternoon of camaraderie and inspiration,” said Prescott Woman Magazine Owner/Publisher Breeanya Hinkel. “The response from the community has been an outpouring of excitement and support as we establish this powerfully encouraging program right here.”

Emmy-award winning journalist, ATHENA Award recipient and QCBN Editor Bonnie Stevens will be the featured speaker with her presentation: A Zonie Girl’s Guide to Staying Sunny, Warm and Resilient. “The business landscape can be heated, thorny and crawling with slithery creatures,” she explained. “We’ll take a look at what’s in the way of achieving your dream – whether it’s a mirage or a prickly cholla – and discuss strategies to stay cool, unscathed and out of the snake pit.”

The ATHENA Award was founded nationally in 1982 by Martha Mayhood Mertz of Sedona and ATHENA International, a non-profit organization that seeks to support, develop and honor women leaders. More than 7,000 exemplary leaders in at least 500 communities have received the award.

“Business leadership is about hard work, perseverance and dedication, but it is also about celebrating important moments and acknowledging extraordinary efforts,” said QCBN Owner/Publisher Troy Bix. “All of us owe a great deal of gratitude to women who have pushed through barriers with strength and grace, helped others along the way and demonstrated what it means to be a leader. We are thrilled to team up with Prescott Woman Magazine to create this much-deserved celebration.”

The goddess Athena was chosen as the symbol for the program to reflect the qualities the award honors – strength, courage, wisdom and enlightenment. By recognizing exceptional leaders, the ATHENA Leadership Award Program seeks to inspire others to achieve excellence in their professional and personal lives.

Nominations for the first Prescott ATHENA Award are due by Monday, March 16. Tickets for the Premiere Prescott ATHENA Celebration and High Tea are $50 per person, $400 for a table of eight. A percentage of the proceeds from the event will benefit the winner’s charity of choice. QCBN