You are here: Home / Archives for Bob Baker 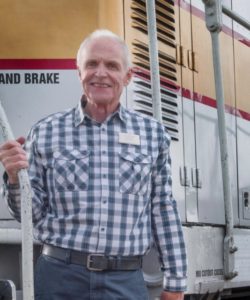 A sign posted on the wall of the Grand Canyon Railway locomotive shop states, “Expect movement on any tracks from any direction…at any time.”

Though a good reminder for engineers and mechanics working on the trains, the advice spells out sage wisdom for Bob Baker’s position as general manager of train operations as well.

With responsibilities ranging from maintenance of the trains to ticketing, Baker has a lot of motion in his job. “I oversee the Grand Canyon Railway Hotel maintenance, safety, security and sustainability and I’m responsible for all aspects of the trains,” he explained in his gentle, polished English accent.

Born in London, Baker has lived in the United States since December 24, 1989, and became a U.S. citizen in 2005. “I was a service brat and every time my dad was relocated, so was the family. I attended 11 schools growing up.”

His career in transportation began with the Peninsular and Oriental Steam Navigation Company (P & O Lines). He then graduated from college in the northeast of England in 1977 and headed out to the “wild blue yonder.” He has a son, Kieran, who works in New York City and a daughter, Kinzi, who serves as an animal handler at Bearizona.

“I started working for Fred Harvey Company [later, Amfac, and now, Xanterra] in 1991 as director of engineering at the Grand Canyon. During my time there, I managed three renovations of El Tovar, built the day care, recreation center and a number of employee apartments.”

A highlight of his life was during a hike from the North Rim of the Grand Canyon to the South Rim. “My wife, Sherry, was a mule wrangler and had taken a group to Phantom Ranch. It turned out she needed a water heater on her trailer, so I installed one for her. We were married at Yaki Point in 2002.” Sherry kept her “dream job” as a wrangler for 10 years.

“Bob and I have worked closely for 11 years developing a close friendship and dynamic business relationship,” said General Manager of Resort Operations Jeff D’Arpa. “We have collaborated on countless construction projects, business initiatives and the daily operation of running the hotel and train operations at Grand Canyon Railway and Hotel. I couldn’t have asked for a better business partner and person to take on the last decade of challenges and opportunities. “

According to Baker, in 2018, approximately 184,357 passengers rode the train to the Grand Canyon from Williams. This equates to 72,000 fewer cars on Highway 64, which can get busy during peak seasons.

The apex of the year for the Grand Canyon Railway is the Polar Express Train Ride where families arrive in matching pajamas with “smiling faces.”

“You cannot put a price on seeing the joy of the children and parents’ faces when they see the North Pole and Santa Claus,” said Baker. “Approximately 96,000 rode the Polar Express Train in 2018, which runs from November to early January.

May 10 marked the 30th anniversary of the re-inauguration of the Grand Canyon Railway. The day was commemorated with a double header using both steam engines (the other steam locomotive is #2960, built in 1923).

What are the character qualities you appreciate most in business associates?

“Honesty and integrity, what they do when no one is looking.  I will go to great lengths to help if you tell me the truth, but I cannot help you if I do not know what really happened.”

What is the best advice you’ve ever received?

“Learn to type. My father gave me a software program called SageSoft and with that program I learned to type. This was back in the 1980s when I was still at sea and got teased about being a secretary! This was invaluable advice as I moved from manual work to office work.”

What is your favorite dish?

“I love Thai food, but I’m particularly partial to a good curry!”

“I love fixing things. I have rebuilt a number of cars – older British sports cars – over the years and enjoy that. I have a 1950 Chevy pickup in need of rebuilding. Hopefully, I will get to work on that one day.”

When the movie is made about your life, who will play you?

“Pretty sure no one would be silly enough to make a movie about me, but I would like to play me. God has brought me on an amazing journey, matched me to the most amazing woman in my wife, Sherry, and given me two great children, now 30 and 26 years old, and even carried me through some tough medical times, including cancer in 2013.” QCBN