You are here: Home / Archives for Northern Arizona

One of the largest privately owned parcels of land in the cool pines of Northern Arizona is currently in escrow and scheduled to close this year. Located in Williams, just 30 minutes from Flagstaff in Coconino County, the 500 acres are owned by Valley entrepreneur Max Biegert, who spent 85 … END_OF_DOCUMENT_TOKEN_TO_BE_REPLACED 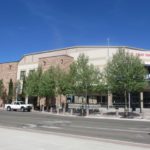 For basketball fans living in Northern Arizona, catching a professional game used to mean a drive to Phoenix, where the Suns play as members of the NBA. This all changed on a warm spring day in Prescott Valley last month. Appearing with leaders of the local community at an April 12 press conference … END_OF_DOCUMENT_TOKEN_TO_BE_REPLACED

Internet scammers steal millions of dollars from victims nationwide each year, and they are not bypassing rural Arizona. “We see about 25 clients per month that have been scammed,” reported Mike Brower of Prescott Computers. “Something pops up on your screen – it says your computer is infected or is … END_OF_DOCUMENT_TOKEN_TO_BE_REPLACED