You are here: Home / Spotlight / Understanding Natural Gas from the Ground Up 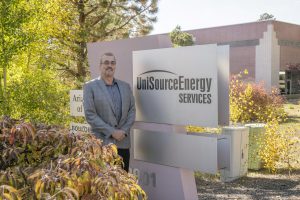 UniSource Director Martin Anaya is passionate about the business and communities he serves.

Off the top of his head, UniSource Energy Services Director Martin Anaya can easily quote the dates and positions of his 41-year career in gas utilities, which began in 1981.

Working literally from the ground up, Anaya’s first position was installing gas lines. As he progressed, his work kept steel pipes from corroding underground. “I started with Southern Union Gas and moved into doing corrosion control, also known as cathodic protection. I stayed in that discipline for many years. It is my passion.”

His goal was to keep UniSource gas pipes looking brand new and in excellent condition. “Anything metal has to have some kind of corrosion control such as bridges, skyscrapers, anything that is made out of steel should have some form of safeguard against deterioration.”

Anaya worked toward many industry and professional certifications based on the discipline of corrosion and moved into a supervisory role for Arizona and beyond. “Southern Union Gas was then sold to Citizen’s Utilities, so once that took place, my duties expanded to Louisiana and Colorado.”

A native of Flagstaff, Anaya continued to live in Flagstaff but traveled a lot. He also continued to advance within the company, serving in several directorship positions.

“Martin is a committed and dedicated leader who is passionate about doing what is right for employees and the communities that we serve,” said UniSource Energy Services Vice President of Field Operation Terry Nay. “I have a tremendous amount of respect and appreciation for his all-encompassing knowledge of the gas business. With his many years with the company, he has served in almost every position possible. With his depth of knowledge, he truly understands the perspectives of our employees, and this enables him to be their best coach, mentor and champion.”

UniSource Energy Services in Flagstaff currently has approximately 60 employees. “In total, we have about 180 employees in the areas we serve in Northern Arizona, Prescott, Cottonwood, Williams, Mojave County, Lake Havasu City, Kingman and Verde Valley. I also oversee the technical aspects for Santa Cruz County, Nogales, Tubac and Rio Rico.”

Prescott UniSource Energy Services Construction and Maintenance Supervisor Jeff Brown met Anaya in 1984. “Martin would bring his crew down to Prescott from Flagstaff to work on our corrosion protection efforts. He is someone who could always be counted on and even though he’s advanced to a top position in the company, he’s stayed true to his roots and treats everybody with respect and hasn’t forgotten where he came from. He’s a great guy and a hard worker, an honorable person who sincerely cares about the people he works with.”

“It’s a blessing to be born and raised here in Flagstaff and have a good job,” said Anaya. “I tell my team to be ready because we’re always one phone call away, but I think it’s important to step away and take time off and experience the beauty around us. My favorite thing to do is hike or camp up on the San Francisco Peaks. That’s my sabbatical and I take no phone. I just lose myself for a few days.”

Married with no children, Anaya said in jest, “It’s just me and my wife, Anita, so we do whatever we want.” Golfing is their sport of choice and Flagstaff Ranch is their favorite destination every chance they get.

UniSource Energy Services and its sister company, Tucson Electric Power (TEP) are among a family of utilities owned by Fortis Inc. Citizen’s Utility was acquired in 2003. UniSource provides natural gas service to Flagstaff and surrounding areas.

“Bring your best every day; you owe it to yourself.”

What I’d Tell My Younger Self

“‘Yellowstone Kelly.’ Many scenes were shot on the eastern slopes of the San Francisco Peaks in 1959. We will never see the mountain like that again.”

“Aldo Leopold, for his forward thinking and observations toward nature and conservancy.”

Goal Yet to Be Achieved

“To be able to give back to all those who have given so much to me and my family in times of need.” QCBN