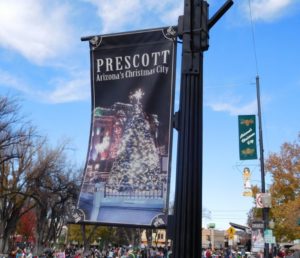 Winter visitors and skiers will be pleased to hear that more seats are available on flights to Denver this Christmas season. Moreover, a new non-stop flight will be added between Prescott and Denver beginning March 5.

That doubles the number of Denver departures daily from Prescott Regional Airport (PRC).The additional flight will operate through June 2020.

Data released by the City of Prescott and the Arizona Office of Tourism reveal the Quad Cities area is becoming a favored destination among national and international visitors. Moderate climate, an abundance of recreational activities, accommodations and a variety of food and entertainment options have resulted in an increase in visitors.

That’s certainly true during the next few weeks, when “Arizona’s Christmas City” receives statewide and regional attention because of holiday events.

Not long ago, USA Today ranked Prescott as a “must-see” community in Arizona, especially during the Christmas season.

The “Christmas City” designation goes back to 1962, when then Governor Paul Fannin named Prescott as Christmas Town. In 1989, the late Governor Rose Mofford issued an official proclamation, calling it Arizona’s Christmas City.

One holiday event that has become famous internationally is the 27th annual Gingerbread Village in the lobby of the Prescott Resort. It opened Nov. 25, and will run through New Year’s Day. It is known as the largest gingerbread village in the world. The carefully crafted, often whimsical displays are created from not just gingerbread but also shredded wheat, crackers, gumdrops, mints, licorice and chocolate chips.

The popular Valley of Lights display in Prescott Valley began during theThanksgiving weekend and continues through Dec. 30.

With the theme “Ugly Sweater Christmas,” the Prescott Chamber of Commerce is sponsoring one of the state’s most popular parades at 1 p.m., Dec. 7. Entries will include bands and marchers from throughout Arizona.

That evening, thousands are expected around the courthouse plaza for the 65th annual Courthouse Lighting at 5 p.m. Earlier in November, the annual fundraiser at the Jersey Lilly Saloon raised more than $18,000 to help cover some of the costs of the estimated $85,000 it takes to string lights around the Courthouse.

On Dec. 8, those who enjoy traditional holiday and Christmas music can hear the Prescott Pops Symphony in a 3 p.m. concert at the Yavapai College Performing Arts Center.

Those who enjoy the traditional “Nutcracker Suite” by Tchaikovsky can hear it at the Yavapai College Performing Arts Center at 7 p.m., Dec. 15.

Those who enjoy dance music can hear a variety of groups at 7 p.m., Dec. 20, when the Yavapai College Jazz Band, the Roughriders and the Trailblazers, perform for a scholarship fundraiser at the concert hall.

For ringing in the New Year, Prescott offers the Whiskey Row New Year’s Eve Boot Drop. An illuminated giant cowboy boot will drop at 10 p.m. and again at midnight, with festivities from 6 p.m. to 12:30 a.m.