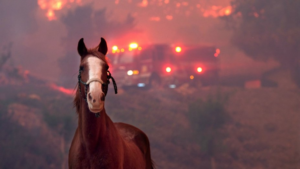 With volunteers, resources, support and communications systems in place, Fontana is feeling confident.

Dry, warm, windy conditions make May and June Northern Arizona’s prime season for wildfire. As cities and forests call for fire restrictions and wildland firefighters are on high alert, Carol Fontana and members of the Equine Emergency Evacuation of Yavapai County (EEE) are vigilantly strengthening their large-animal rescue networks, identifying resources and preparing for action.

“At least half of our group has been training for the last year,” said Fontana, EEE board chair. “We have a great dispatch and evacuation management team, and several ham operators to keep track of the rigs.”

EEE is only two years old. It is an all-volunteer organization, with about 82 members. The group has identified horse trailers and 26 staging areas around the county where horses, donkeys, goats and other large pets can be delivered safely in the event of an emergency. A survey by the group reveals there are some 7,000 such animals in Yavapai County. More than a third have no means of evacuation.

Members of the horse management team, like volunteer Kay Lyons of Prescott Valley, will greet the rigs at the staging areas and quickly unload the animals so the trailers can go back to threatened areas to get more animals out.

“All of the volunteers I have been training with are wonderful people and very experienced horse people,” said Lyons. “It is very reassuring to know that so many people are willing to help in case of an emergency and that our community’s horses and livestock will have a safe place to shelter if a fire threatens our county. I am especially impressed with the systems to keep track of the horses with both paperwork and photo ID and security measures to ensure that horses will be returned to their owners.”

This spring, EEE volunteers gathered for technical demonstrations to learn how to rescue large animals from tricky places like ravines. They also have worked to perfect their processes, which include Eyes on Yavapai, a notification system that connects neighborhood coordinators who can relay first-hand information about situations and resources in their areas.

EEE partners with the Yavapai County Sheriff’s Office in rescue operations as well, and connects with others around the country to learn from their experiences. Local volunteers join in Zoom calls with large-animal evacuation volunteers in California, who have been hammered by forest fires in recent years and meet regularly to discuss strategies.

Hardy species like manzanita are starting to die off, and bark beetles, which devastated the West in the early 2000s, have made a reappearance.

“We have complex fuel conditions to deal with,” said Zone Fire Management Officer for the Coconino and Prescott National Forests Brian Steinhardt. “We are well deficit in our moisture, which leads to stress on our plants. Weakened trees are unable to make sap to push the bugs out. We are now seeing the effects of bark beetle attacks and dying juniper trees from Chino Valley to Ash Creek. That changes the fuel conditions from a fire perspective. The grasses have filled in between trees and we have continuous fuel from one dead juniper stem to another. The orange needles become volatile, almost like gasoline.”

Aware of the Risk

The EEE website emphasizes the risk of wildfire in Yavapai County by noting large fires in recent years. It reminds residents about the 2019 Sheridan and Cellar fires, which came close to developed areas. “We’ve been very, very lucky,” said Fontana, who emphasizes that luck is not a good strategy. “There were huge fires in every county except for ours last year. They are going to happen.”

Fontana started EEE after riding the Arizona Trail with her Arabian champion horse, Tiki, from Mexico to Utah in 2016. “We worked our way around five fires and I got home and thought, ‘We’ve got to organize our neighborhood!’”

Fontana has been riding horses since she was 4. Seeking endurance ride opportunities, she moved to Prescott from Pennsylvania 10 years ago.

She says the organization started with a Facebook page calling for volunteers during the June 2017 Goodwin Fire near Dewey. “That became a very dangerous situation. We had several rigs go to one address and got stuck. If the fire came through we would have been cooked.”

With volunteers, resources, support and communications systems in place, Fontana is feeling confident. “I believe that we can handle whatever happens, within reason. We’ve talked to people in Solano County, California, who were involved in the Vacaville Fire last August. They had to start their evacuations in the middle of the night. I don’t anticipate anything like that but with our tracking and communications guys, Eyes on Yavapai, we’ve got some of the best horse and comms people around. We have a great group.”

EEE has a hotline, 833-922-9333, for those who need assistance in any kind of large-animal rescue emergency. The non-profit organization operates on donations, which can be made through its website, https://eeeyc.org. QCBN